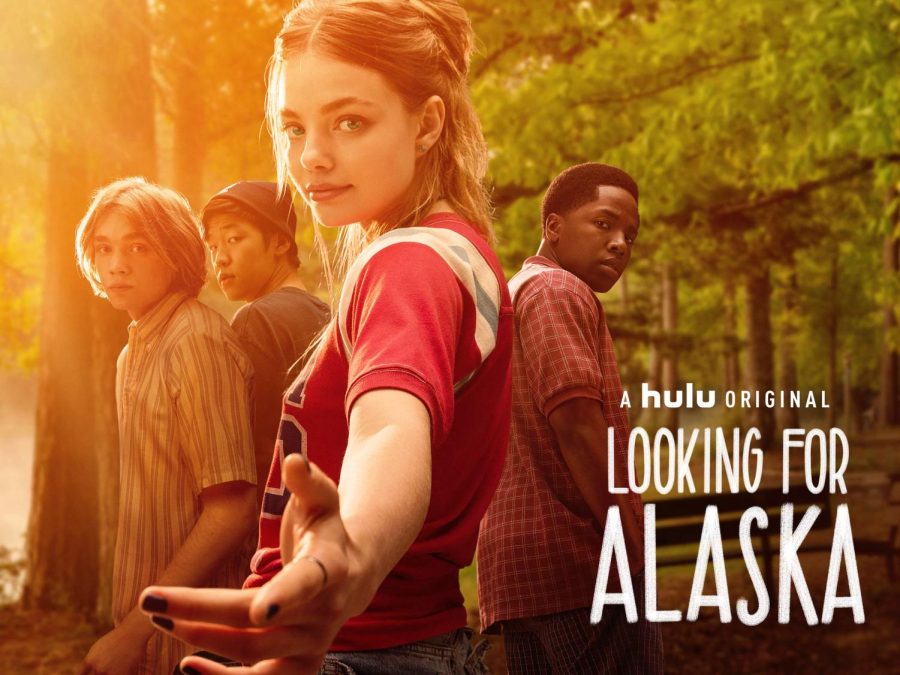 “Looking For Alaska” is a teen drama novel written by John Green, the writer of multiple teen blockbusters, including “The Fault in our Stars,” “Turtles All the Way Down,” “Paper Towns” and “An Abundance of Katherines,” all of which are New York Times Best Sellers. “Looking for Alaska” was adapted for television by Josh Schwartz, who also created Gossip Girl and Carrie Diaries. It premiered on Oct. 18, 2019.

Miles Halter, also known as “Pudge” and played by Charlie Plummer, starts attending Culver Creek, a boarding school in Alabama, at the beginning of his junior year of high-school. Miles was tired of not having friends in Orlando, Florida, which is where he is from. He loves to learn about famous last words, and his wish while he is at Culver Creek is to fulfill the last words of poet Francois Rabelais, “I go to seek the great perhaps.”

Upon arriving at Culver Creek, Miles meets his roommate Chip Martin, nicknamed “The Colonel” and played by Denny Love, who introduces him to his soon to be friend group: Takumi Hikoito, played by Jay Lee, and Alaska Young, played by Kristine Froseth. Miles’ new friends, who are on scholarships, teach him the ways of Culver Creek, like the feud with the Weekday Warriors, the rich kids at school.

The show is structured in two parts: before and after a car crash shown in the beginning of the first episode, the details of which aren’t entirely clear.  This happens one night when Alaska realizes she has to take flowers to her mom’s grave and goes into a panic. Alaska is very intoxicated after drinking with Miles in his room. She tells Miles she has to leave, so Miles and The Colonel help her out of the Culver Creek campus while distracting the dean of students, who is known as The Eagle.

The next morning they have an assembly in the gym, where they soon find out that their classmate and friend Alaska Young has died at the young age of 18 in a fatal car crash. After this horrific event, Pudge, The Colonel and Takumi suspect it as a suicide.

Pretty early on, you notice that Miles is falling in love with Alaska. Because Alaska knows about Pudge’s obsession with last words, she makes a deal with him: she says she will get him a girlfriend if he can figure out the answer Simon Bolivar’s last words, “How will I ever get out of this labyrinth?”

Alaska is unpredictable and moody. Because her mom died when she was young, she feels like she doesn’t have a home. Her dad isn’t very supportive and she always stays at Culver Creek during the holidays. She’s in a long-distance relationship with her boyfriend Jake, but is very flirty towards Miles. Throughout the show you can see how free spirited Alaska is:she has a fake ID which she uses to buy alcohol and cigarettes from the local liquor store.

Because the show is set in 2005, it gives an interesting glimpse of the lives of teens before cell phones. Miles’ friend group spends more time getting into trouble in the real world instead of being distracted by devices. They smoke under a bridge on campus and all enjoy pranking the Weekday Warriors, but this also means putting their scholarships at risk.

The show is relevant to teens because it shows how different people from different backgrounds deal with grief, whether it’s Alaska struggling with losing her mom or how Pudge, The Colonel and Takumi feel responsible for Alaska dying. After Alaska dies, Pudge and The Colonel say that they shouldn’t have let her leave and that they regret it. When you lose someone in that kind of way you always question what you could’ve done.

Those who enjoyed the movie “The Perks of Being a Wallflower” might find some similarities to “Looking for Alaska.” They both show how teens deal with the grief of losing a friend to suicide as well as managing mental health challenges and trauma. They are both based on the dynamics of a friend group and show the male main character falling in love with a girl in his circle who is just out of his reach. They also share a nostalgic view of the teenage years.

The show is layered enough that a second viewing reveals greater depth, like when you glimpse Alaska looking at the plastic flowers in her room, or when Alaska and Miles are talking about the labyrinth and Alaska says, “What if Bolivar wasn’t talking about life or death, but that part in between, that part when you love with all your heart and then your heart breaks, and you have to keep living, alone. How will I ever get out of this labyrinth of suffering?” Miles tries to answer this question after Alaska’s death, and says, “After all this time, it seems to me like straight and fast is the only way out, but I choose the labyrinth. The labyrinth blows, but I choose it.”