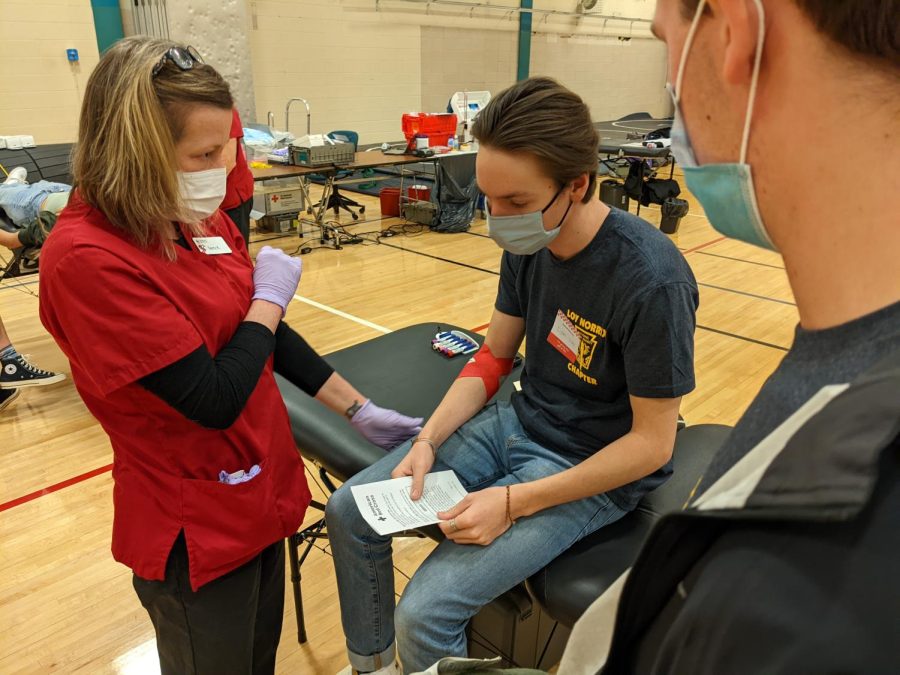 Senior Liam Braun is given instructions by a Red Cross staff member after donating blood. Loy Norrix students had the opportunity to donate blood on March 21 in the auxiliary gym.

According to the New York Time’s COVID-19 Dashboard, there have been over 32 thousand new cases each day of COVID in the United States as of March 16. Around 802 cases are concentrated in Michigan, and out of the new daily Michigan cases, roughly 21 are in Kalamazoo County. These numbers mark a return to the September 2020 case number average in Kalamazoo.

The National Honor Society in partnership with the Red Cross are hosting a blood drive on Monday, March 21. If you have registered to give blood, a NHS representative will take you to the auxiliary gym between 7:45 a.m. and1:30 p.m..

Register at redcross.org or in the cafeteria during all three lunches. You have to have to fit the requirements for blood donation, posted at redcross.org, as well as be at least 17 or 16 with a parental permission form that you can get in the office.

Last week, starting on Thursday, March 10, DECA members competed at Cobo Hall in Detroit. Four-thousand members were present and 26 students were from Loy Norrix. Students Aliah Ward, Nateya Thomas, Chanel Wilson, Wendy Miedema and Arturo Pinto won in their respective events and are moving onto the national competition in Atlanta, Georgia on April 26.

In the past month, the Michigan Health Department has stopped encouraging masks in schools and indoors.  More recently, those employed by the state are no longer required to wear masks as a result of declining COVID cases.  Some counties in Michigan have ended their mask mandates already as well, including Washtenaw, Oakland and Wayne.

The four accused kidnappers of Governor Gretchen Whitmer were scheduled to go on trial for their alleged crimes on March 14th, but the trial was postponed until at least the 17th as a result of a positive COVID-19 test from someone involved.  Jurors have been presented with a recording of the men involved discussing the kidnapping along with social media posts that critique the government and encourage violence. Whitmer herself isn’t expected to attend the trial that is expected to last over a month.

In Dearborn Michigan on March 2nd, Charles Woolery robbed a bank on Michigan Ave. He went into the bank and threatened to kill everyone if money wasn’t handed into his bag by the teller.  Surveillance cameras near the scene got footage of Woolery leaving the scene and eventually climbing into a porta-potty to hide from the police.  In the end, he was taken into custody for stealing $1,690.

On Friday, March 11, a 67-year-old woman of Asian descent was attacked in Yonkers, New York. She was struck 125 times all together and the perpetrator, 42-year-old Tammel Esco, according to the New York Times, “had been charged with attempted murder and assault, both as hate crimes, as a result of the attack.” The assault was captured on a security camera and Esco called her an “anti-Asian, misogynistic slur,” the NYT continued.

On Tuesday, March 8, the Florida Senate passed the Parental Rights in Education bill, dubbed the “Don’t Say Gay Bill” by critics. Republican governor of Florida, Ron DeSantis, will see the bill next and if signed, it would go into effect on July 1, 2022. DeSantisexpressed support for the bill in the past.

Explicitly the Parental Rights in Education bill states: “Classroom instruction by school personnel or third parties on sexual orientation or gender identity may not occur in kindergarten through grade 3 or in a manner that is not age appropriate or developmentally appropriate for students in accordance with state standards.” If the bill’s directions are not followed by teachers, parents are authorized to “bring action against the school district.”

The outrage regarding the bill’s passing is palpable, with many Democratic politicians and public figures speaking against it.

In a statement on March 8, Education Secretary Miguel Cardona said, “The Department of Education has made clear that all schools receiving federal funding must follow federal civil rights law, including Title IX’s protections against discrimination based on sexual orientation and gender identity.”

Ukrainian president Volodymyr Zelenskyy addressed the U.S. Congress this Wednesday, March 16, asking for more aid from the U.S. and more sanctions against Russia. He cited Pearl Harbor and September 11th in his speech and stated that similar events like these were occurring in Ukraine every day. The U.S. plans to add more monetary aid to the $1 billion already given.

Russia is still using long-range missile strikes and artillery barrages in their sieges of Ukrainian cities still populated by civilians.

Most nations across the world have revoked Russia’s “most favored trade” status as another attempt at condemning and ending the war with economic sanctions.

A 7.3 magnitude earthquake struck near Fukushima, Japan, causing tsunami-like waves off the coast. It is the same area where a 9.0 Magnitude Earthquake struck the area, causing the meltdown of the Fukushima Daiichi Nuclear Power Plant, spreading radioactivity across the area nearly 11 years ago.

The men’s college basketball tournament known as March Madness is kicking off this week. Games can be watched on CBS, TNT, TBS and TruTV.

The Academy Awards 94th Oscars ceremony will take place on March 27 on ABC at 8:00 p.m. eastern time. Hosts will be Regina Hall, Amy Schumer, and Wanda Sykes. The Oscars this year have undergone a plethora of changes following last year’s ceremony amidst the COVID-19 pandemic, most notably widening the best picture category to 10 nominations from the standard five in pursuit of increasing the diversity of recognition in prestige.

Alec Baldwin claims innocence in the current case against him for the death of Halyna Hutchinson. Hutchinson was killed by Baldwin on the set of upcoming wild west film “Rust” after being given the direction to fire a firearm without knowledge of it being previously loaded. Baldwin has been called out by production armorer Hannah Gutierrez Reed for not following gun safety rules. Baldwin continues to claim that his contract with the production protects him from any financial liability in the case and states that her death was the fault of Gutierrez Reed, who was not called to set the day of Hutchinson’s death.