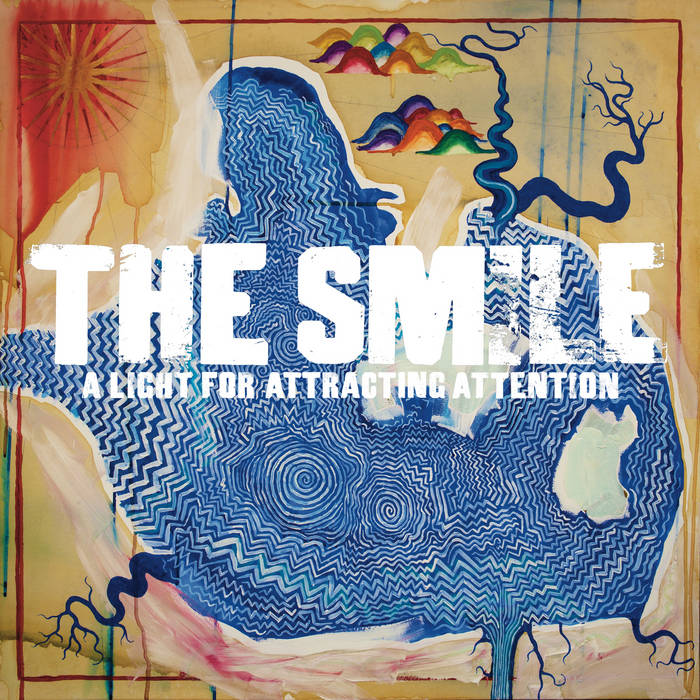 The Smile was started in 2020 after Phillip Selway, Radiohead’s drummer, announced he’d be taking time off to work on other projects. This project seemed like a sort of Radiohead 2 because it included fellow Radiohead members Jonny Greenwood and Thom Yorke, with the help of the drummer Tom Skinner. Thom Skinner’s influence is sort of obvious because Wikipedia describes them as Post-punk which isn’t very reminiscent of Radiohead.

“A Light for Attracting Attention” has 13 songs on it and they each have something unique and interesting about them.

“The Same” is the debut track on the album and the intro could be used for a police chase scene in a cyberpunk movie with a pretty gloomy bassline and a synth of some sort playing on top of it.  This leads to Thom Yorke’s vocals coming in with an effect that is annoying at first but is eventually interesting and  a simple but pretty acoustic guitar part.

“The Opposite” starts off with a groovy drum intro set in 4/4, but it is so groovy that it sounds like an odd time signature. Leading into a funky palm-muted electric guitar riff with what sounds like it could be 2 guitars playing in the first 30 seconds of the song, “The Opposite”continues with Thom Yorke singing some pretty nonsensical lyrics that  fit together pretty well.

“You will never work in Television Again” starts with some pretty post-punk sounding electric guitars setting the stage for some vulgar lyrics critiquing the film/television industry. Thom focuses his attention on the Harvey Weinstein types who take away the dreams of people with actual talent in the line “All those beautiful young hopes and dreams, / Devoured by those evil eyes and those piggy limbs.”

“Pana-Vision” starts with an incredibly eerie piano in 7/8 and sounds like it might be in some weird mode because it’s not a standard major or minor key.  Then, after some lyrics from Thom Yorke, it seems to switch into a minor key and then shifts back and forth with that odd piano part and eventually sounds like a whole orchestral piece which was completely unexpected and was pulled off very nicely.

“The Smoke” starts with a little drum fill working as the backbone for some pretty funky bass and guitar to play over with some lyrics that seem self-destructive at first but then seem to ask for another chance with yourself with the lyrics “As I dive in the flames, / As I set myself on fire” which leads into “We should give ourselves another chance, let go of our troubles.”

“Speech Bubbles” instantly sets the tone as sort of melancholy and nostalgic with the instrumentation alone, and Thom Yorke sings in his signature high falsetto about running away from a city in ruin with an insinuated partner in crime and never being able to find a place to settle down. A good song which sort of makes the listener feel settled down.

“Thin thing” greets the listener with an odd but nice guitar riff and lyrics about a sinister “thin thing” who will pull your toes and your fingers off then will eventually steal the pictures from your phone all without you noticing and will turn men into mushrooms. This is one of the standout songs from the album if not for its inventive musical ideas then for its odd lyrics alone.

“Open the Floodgates” has an 8-bit sounding piano which could feel at home in a Pokemon game and has lyrics which seem like they’re a conversation with the listener a nice intimate change of pace from the earlier parts on the album.

“Free In the Knowledge” was one of the first songs performed by The Smile even though it was originally t a Thom Yorke solo performance. This song has some very emotional lyrics about Thom having two halves of his personality and his desire to separate from one of these personalities, but he eventually comes to accept that both personalities are always going to belong to the same person.

“A Hairdryer” has a very intriguing guitar part which almost sounds like a sitar but other than that much else wasn’t interesting about it.

“Waving a White Flag” starts with a suspenseful synth part that draws you in wondering what’s going to happen next, and what happens next is some pretty weird lyrics which convey a story about not wanting to get into a confrontation with somebody.

“We Don’t Know What Tomorrow Brings” starts with more synth but this time has some upbeat lyrics to go along with it which is pretty uncommon for a Thom Yorke song which makes it another standout of the album.”

“Skrting On the Surface” isn’t a typo and is also the closer of the album and continues the pattern of Radiohead albums ending with a song about death; although, this one isn’t overtly about death – it talks about how death can happen at anytime and also is about how broken people are under the surface of the smile that they put on for people.

This album was pretty unexpected coming from Thom Yorke and Jonny Greenwood who are notorious for making sad music, but this album seems to have some energy in it with funkier drumbeats than nearly any Radiohead song and a more energetic upbeat vocal delivery from Thom Yorke.