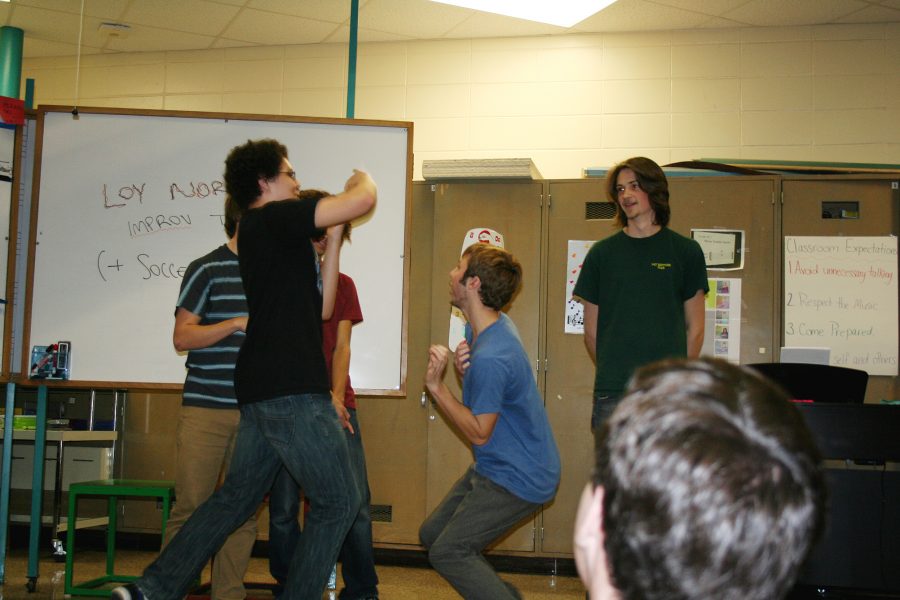 Photo by Asia Davis The Improv Team holds shows in the choir room throughout the year. Keep a lookout for posters and announcements to learn specific dates and times.

On Thursday, November 1 the award winning Loy Norrix improv team, or IT (standing for Improv Team) held their first show. They teamed up with our varsity soccer team for an amazing show. They featured the soccer team in their first act where they battled each other with puns and witty comebacks.

The coach and history teacher, Matthew McCullough was also included in the show with skit called “A Day In The Life Of”. In the skit the team acted out McCullough’s day with unexpected twists and turns.

IT did a number of other acts that had the crowd laughing hysterically. IT definitely considers the show a success, because the room was packed. The show sold out with every chair filled and even some overflow onto the stairs.

Junior Grace Santamaria describes this as a blessing and a curse because they have the opportunity to say they sold out and it was packed but they can’t fit many people in the choir room.

When asked why they don’t move the show to auditorium she replied,“The intimate setting is best for improv because you rely so much on facial expressions and voices that you really want people to catch.”

To prepare for the show the team runs two-to-three improv games including every single person in different formats. To determine who’s in which skit depends on who works best with each other and the chemistry between the two. Teamwork and chemistry also determines whether or not someone makes the team. The person needs to be team oriented and the connection has to be there.

Santamaria describes the team as airtight and how crucial that is to their success. This is key because they have to be able to pick up on the other persons humor when performing and in practice.