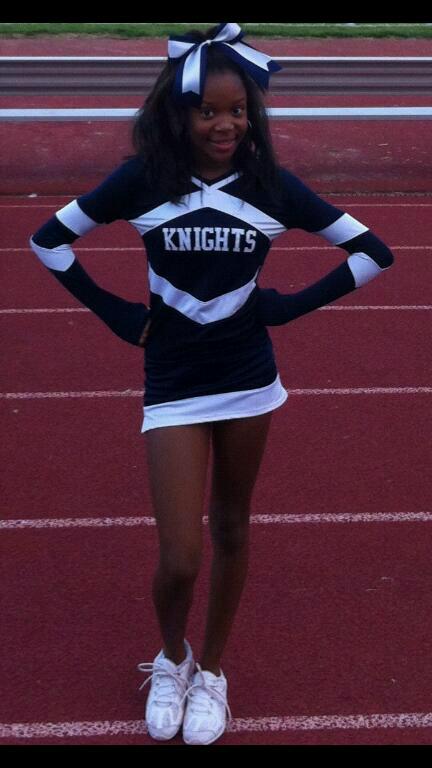 Christya Reynolds stood in the quiet back gym of Loy Norrix High School, anxiously waiting to perform. The whole main gym was packed with people waiting for Reynolds and her team to perform. Little did she know that she was in for a big surprise.

Inspired by her cousin, Reynolds is in her first year of cheerleading. She has liked it so far and will be cheering competitively this year.

Reynolds is always nervous before a performance, but this day had her more nervous than ever.

It was the day of the homecoming pep rally at school. Everyone was excited because it was the first pep rally. Her next conversation with her coach didn’t help the nerves at all.

“My coach said I had to learn 4 stunts in 5 minutes,” said Reynolds.

All the chaos started the day before at practice. It was the last practice until the pep rally and everything was going smooth until suddenly Makenna Sandt fell on her head.

“We started a new stunt and Mckenna was in the air. She did a wrong turn or something,” continued Reynolds, “And the back spot froze and she fell.”

The next day the cheerleading team found out that Sandt had a concussion.  This meant they would need someone to fill her spot for the pep rally.

That person was Christya Reynolds.

Reynolds had to learn these new stunts and also make sure one of her teammates didn’t fall during the stunt.

The cheerleading team was shaking before their performance when they heard their names. It was their turn to perform. They tried to stay calm but saw their friends cheering in the crowd and got nervous again.

“We were nervous, but as soon as we started cheering all the nerves went away,” said Reynolds.

Reynolds was ecstatic after the cheer. Everyone was crying in the back gym. They were all hugging and saying how proud they were of each other. All of their anxiety went away.

“I was extremely proud that she [Reynolds] had the ability and confidence to perform as she did. Christya was very team dedicated to take on such a large task and do so well,” said freshman teammate Zoe Buszka.

Reynolds faced a challenge and her hard work paid off in the end. That performance was her favorite part about cheerleading so far and everyone was happy, even her coach.

“Our coach said she was proud of us,” Reynolds said, “That was the best part, she never says that.”