Wrestling is More than a Fight 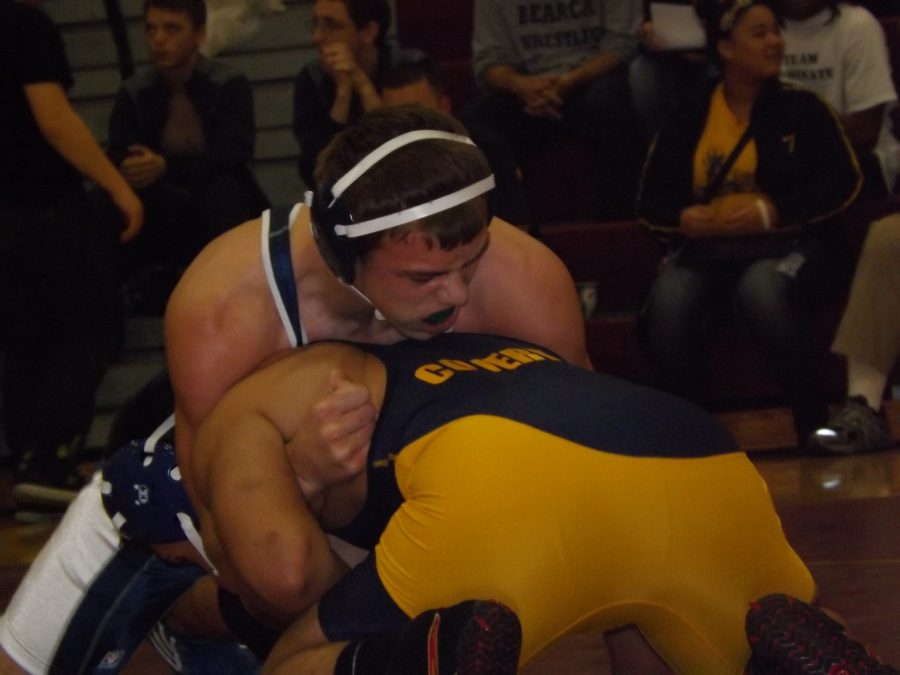 Photo by Kiosha Miller The Loy Norrix wrestling team works hard to help each other improve individualy. Being focused and prepared is what is guiding them to sucess.

Two wrestlers filled with adrenaline dance back and forth around the matt. Muscles tense, faces stern they try to determine their oponents’ weakness and form a plan of attack. The final goal is to put your opponent on the ground and pin them for final victory.

Everyday the Loy Norrix wrestling team has to drag the mats out and mop them before practice, which is a workout in itself.  Junior Joe Boggan who is the wrestling team’s captain, junior Juan Paz and senior Beatrice Powers are the upper classmen on the team

The team as a whole is young with a lot of talent and potential. They have to participate in intense cardio. Each person has to get as fit and healthy as possible because it improves his or her game; that may mean losing weight, bulking up and increasing endurance. Wrestling is a one on one sport so if you lose, it’s on you. The team encourages each other to get better.

Wrestlers are classified by weight to make it fair. Conditioning is very intense and they have to learn lots of moves such as the double leg, single leg, fireman’s carry, bear hug and the half nelson. Each move has to be executed perfectly to get the right affect. The wrestlers have to put their moves into action and take their opponent down without hurting them in the wrong way.  The sport is non-stop movement. Wrestling takes lots of practice and mental concentration because safety is very important

On Saturday December 8th, 2012 Joe Boggan qualified as a semi-finalist. Boggan entered his first match with his Decatur opponent Andres Cortez unprepared and rushed his way through it; he was down at 1:13 seconds leaving him with a loss. Boggan had a choice from there to give up, or let that push him harder. He chose to let it push him. He quickly decided to get focused this allowed him to win his next match against his Olivet opponent Jared Calkins in 51 seconds. His last match was against his Lakeview opponent Grant Anderson after 2:04 seconds Boggan conquered.

From the sideline during a wrestling match it looks like the two competitors are male lions trying to earn the position of Alpha male and their territory. They have a goal and a premeditated way to conquer. The question is, if you want to wrestle as a sport why would you need to practice when it seems like something that comes naturally? The answer is technique is key. Without technique it would merely be a fight.

Beatrice Powers is one of the two girls on the wrestling team she said, “ The hardest part of it is trying to put the moves into action.”

During practice Powers said all the moves come easily because they are being practiced. It’s when she gets under the stress of an actual match that she struggles putting the moves into play. She has to be mentally and physical ready at the same time.

Junior, Juan Paz entered his wrestling match in Buchanan Michigan ready and focused. With a stern look on his face he refused to be distracted.  He had determined in his head he would be undefeated. That is exactly what happened. He was prepared and he knew his opponent. This allowed him to leave 5 and 0. Juan was undefeated. This was his best moment so far in wrestling.

Junior Joe Boggan said, “ I have to be patient and know my opponent. It is very intense and technical.”

No one is exactly sure when wrestling started but it has been seen in many cultures for thousands of years. The Japanese, Ancient Romans and Ancient Greek all have evidence that they participated in some form of wrestling throughout their history.