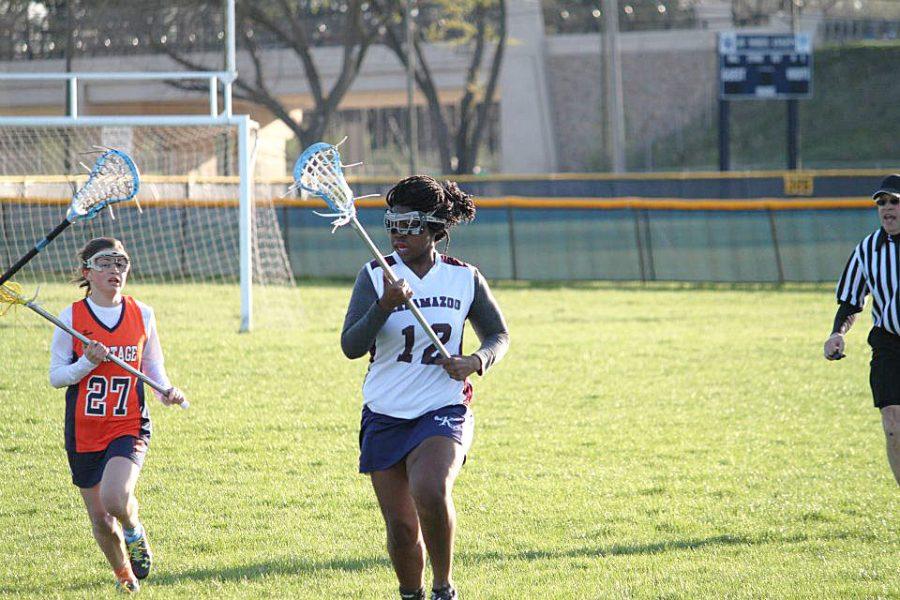 Senior Zinzey Ndluvo yells to her teammate the she is open. She sprints down the field and tries to score.

The whistle is blown, the ball is flung into the air, and the lacrosse sticks in the center of the field fly. Lacrosse, also known as LAX, is a contact sport you play with a rubber ball and a stick with a net at the end of it. The main objective of the game is to pass the ball around to your team and to shoot the ball in the other team’s net. The game is 50 minutes long, with each half being 25 minutes
Loy Norrix and Kalamazoo Central come together to form the Kalamazoo Girls’ Lacrosse Team. Last year the team started off with fifteen players and ended with twelve.There are supposed to be twelve players from each team on the field, which means everyone had to play the whole game. Sometimes they made deals with the other teams so that they could play ten on ten and have two subs. Not having enough girls to play was hard for a lot of the team members, especially sophomore Lindy Moored.

“It gets really tiring,” said Moored, “I had to play every game all game.”

Lindy has always been interested in lacrosse because it was a very popular sport at her middle school. She started playing last year, her freshman year, and found it to be a very good way to meet new people and make new friends.

“You have to have an open mind, be willing to participate,” said Moored, “It’s a good sport to play because we are willing to help people out and it’s not that hard to pick up.”

One of last year’s captains, senior Zinziey Ndlovu, has been playing lacrosse her whole high school career. She was tired of wanting to play the usual sports, like everyone else, so Zinziey decided to join the sport of lacrosse. At first Zinziey wasn’t the most out going girl, but thanks to the sport of lacrosse she has become more social.

“It made me so secure with myself and since its such an aggressive sport, the anger I had, I dealt with on the field,” said Ndlovu, “It’s my remedy.”

Not having enough girls on the team last year was tough for Zinziey as well, but she believes it brought the team closer together. It put pressure on the players that others didn’t have to deal with. Zinziey Ndlovu encourages everyone to play some kind of sport, especially lacrosse.

“Lax molds you with a tougher surface,” said Ndlovu, “You won’t be able to feel that without putting yourself out there.”

This year Zinziey wants to become the head captain and hopes that they will have more girls for the 2013 lacrosse team. The practices consist of a lot of cardio, stick work and team bonding. The team practices everyday after school. Last year’s games were on Monday, Wednesday, and Fridays, with tournaments on certain weekends. Conditioning starts next week. The dates for the 2013 season games, practices, and tournaments will be announced soon.