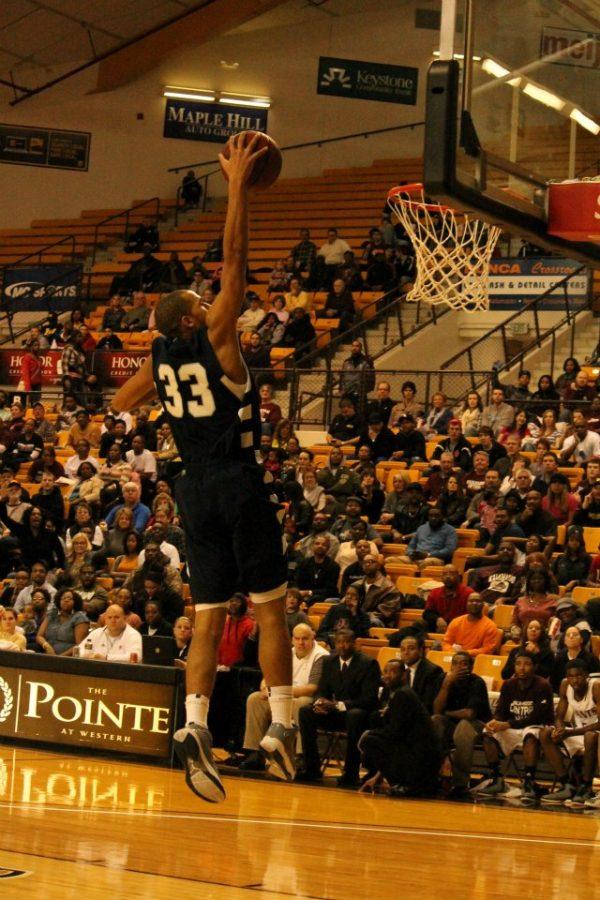 Senior and all-around star Bishop Rocco-Robinson unleashes a breakaway dunk. He has scored over 1000 points in his career.

Before January 26th, 2013, no student currently attending Loy Norrix had witnessed their basketball team win against Kalamazoo Central.  There have been four years of heart-wrenching losses that came down to the wire, including one year in which K-Central went on to play in the state championship. However, this year’s men’s team decided to put that losing streak to an end.

The game started off explosively, with LN and KC dropping a 3-pointer each. It remained neck-in-neck throughout the first quarter, with no team going up by more than a few points.
At the start if the second quarter, a breakaway dunk by senior Bishop Robinson opened up the game for the Knights.  It spurred an 8-0 run by the Knights which ended the first half with the Knights up 13  at 34-21.

After a slow 3rd quarter for the Knights, the Giants came within 4 points, but the Knights started rolling again in the 4th with big plays, including some huge blocks and another breakaway dunk by Darrion Mullen.

The game ended with the Knights winning 68-53.

This one game is really just a piece of a much bigger picture for Loy Norrix basketball and Loy Norrix athletics as a whole.  The students and staff have done nothing but good for Loy Norrix school spirit over the last few years.  The basketball games are now a truly electric environment, featuring a student section so loud you can hardly hear yourself think, a booming pep band, and the occasional banana suit.

The basketball team itself is also playing better than ever, standing as a strong contender for the SMAC East championship.  They are a thrill to watch, and many players have the skills to play on into college.  Every game has a unique mix of dunks, 3-pointers, and every shot in between.  Some games have even come down to sinking last-second shots and overtimes.

In the stands, there is a fantastic student section cheering the team on.  Students that make up the section all wear matching black shirts and are called the “Knightmare,”. As a group, they ramp the energy in the room up to a maximum, and it’s easy to tell that the players feed off of their enthusiasm.