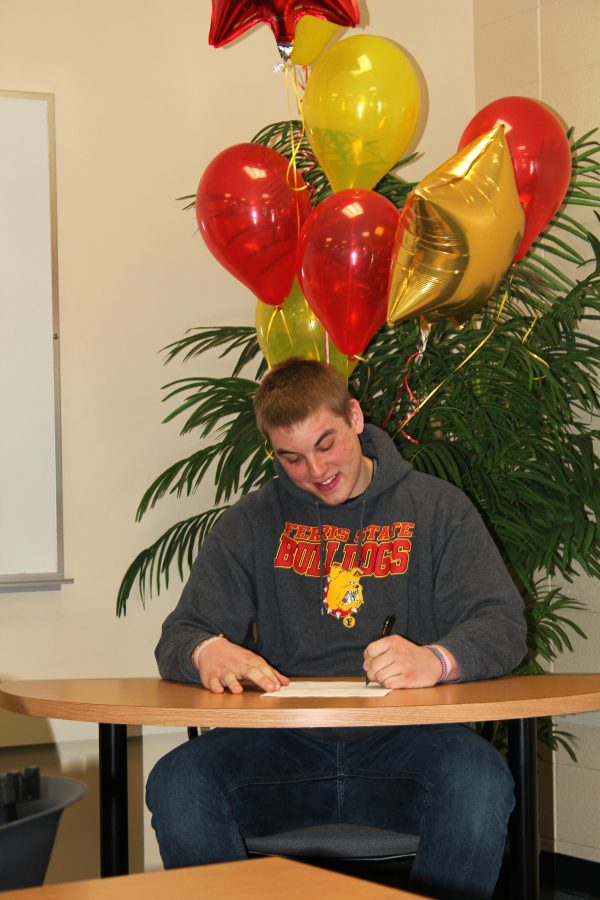 After overcoming the struggles of his freshman year, senior David Mann finally made his dreams come true. He will bring his passion for football to the Ferris State University team this coming fall.

Sports do not build character, they reveal it.  Senior David Mann, varsity football offensive lineman, has shown his true colors both on and off the field.  Mann’s encouragement to others, obvious adrenaline, constant trainings, and readiness to play at all times affirm his passion for the sport.  Mann began playing football in middle school at Milwood Middle; however, he always knew he wanted to play collegiately.

“Ever since I was a little kid I used to go to college football games.  I would tell my dad I’d be one of the players on that field,” said Mann.

Mann holds his father responsible not only for first getting him into football, but also for supporting him over the years.

“Freshman year I thought about quitting, but he encouraged me to keep playing and chase my dreams,” Mann said.

His father was not the only one who knew he had it in him.  Varsity football coaches, Sean Bergan and Robert Bradford, kept hard pressure on Mann over the years, pushing him to reach his full potential.  When football was in the off-season, Mann’s motivation never paused.  Ameer Ismail, the Assistant Athletic Director during the 2011-2012 school year, is to whom Mann attributes much of his success.

After fighting the battles of high school sports, attending summer football camps, and attempting to get his name known, Mann’s dreams finally came true in December 2012 when he received an offer from Ferris State University.

“After three visits it felt like the place I belong and I felt like I could really connect with the coaches there.”  Mann continued, “It [Ferris] had all the programs I wanted.  They have a professional golf management program and a really good business program.”

Mann verbally committed to Ferris State in January and then sealed the deal on February 6 with his signing party.

Although his upcoming future is set at Ferris, Mann still has a very important goal to tackle: “to finish out senior year strong; to walk across that stage,” he said.

Success is never handed to you, it is earned.  This is something Mann has discovered fighting for his dreams.  And after all his hard work and persistency, Mann has finally achieved what he so desperately wants: to play collegiate football.

“I never thought I could make it,” he said.  Leaning back in his chair and spreading an ear-to-ear smile across his face, Mann looked up and proclaimed, “I did it!”