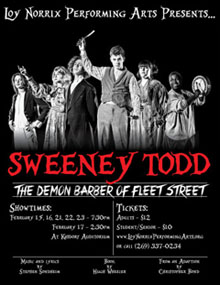 There is still talk about the stunt in the very last scene of opening night in this year’s musical, “Sweeney Todd” when the actors weren’t just bleeding fake blood.

The musical “Sweeney Todd” is set in the 1900s in England and tells a story about Benjamin Barker, also known as Sweeney Todd, who comes back to England after being transported 15 years ago. Todd teams up with a pie maker, Mrs. Lovett who together come up with a bloody way to the judge’s throat. Todd soon gains the trust of many locals as he skillfully kills them off one at a time.

Sweeney Todd, played by Joe Santamaria sniffles while he stares into the face of his dead wife. Grieving over a loved one is normal, but what about the blood pouring from his nose? Audience members were shocked when they saw the red dripping from Santamaria’s face.

“At first I was trying to convince myself it wasn’t happening, but once I saw my blood on the stage, trying not to bleed too much became my first priority.” said Santamaria.

These high school students did a phenomenal job at pulling off the complexity of the brilliantly written music and lyrics by Stephen Sondheim.

Mrs. Lovett played by Grace Santamaria, was one of the most complex characters in the show. Grace had to play the witty, lonely pie maker who had no problem baking people into pies but felt the need to mother a young boy named Tobias played by Joriah Fleming. Her character is humorous yet dark.

This is truly one unforgettable opening night for not only the actors, but the audience as well.

“I thought it was fake at first then more just kept coming, so I figured it was real,” said Cheryl Mattingly. Mattingly attend Friday night to support the students of Loy Norrix.

Amyre Dennis expressed her confusion while on stage with Joe having a tough time staying in character.

“I am supposed to be dead, but I could feel the things around and something wasn’t right,” said Dennis. “As soon as I got off stage, Joe runs up to me and tells me he had a real nose bleed and that was real blood on my costume,” continued Dennis.

If you have not yet seen “Sweeney Todd,” your opportunity isn’t gone, there are two more chances. February 22,23 at 7:30 pm.