Juniors Prepare for Most Important Test of Their Life 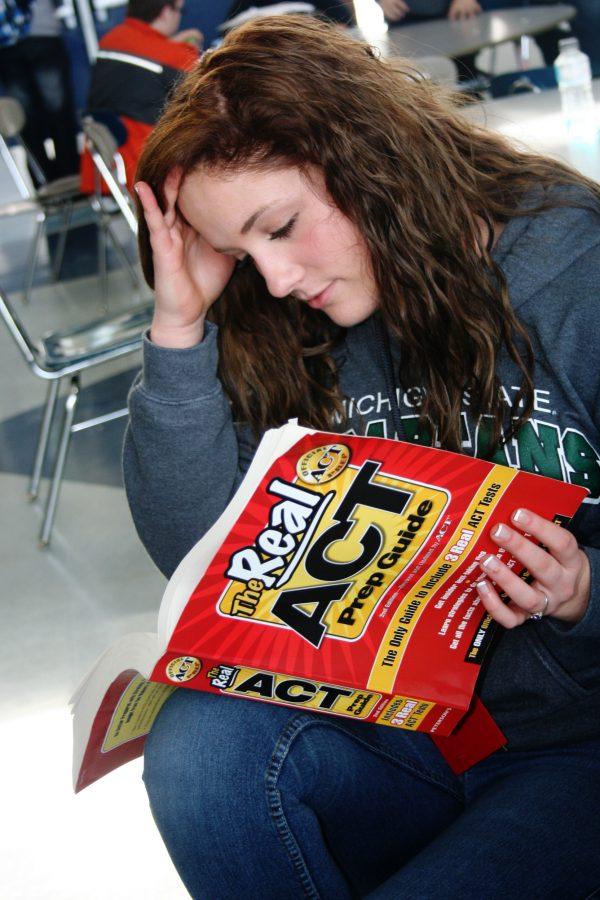 Junior Claire Mears instead of eating and socializing with friends at lunch decides to study for the ACT. With the ACT and MME tests being this week, many juniors are forced to crack down on studying.

March 5th 2013 is the day juniors of the 2014 class wish wasn’t even a date on the calendar. The ACT is a test like no other, no way to study, no guarantee of what will be on it, and there is a time limit. For many aspiring college students this is the scariest thing they have to do in their time as a high school student.

Junior Jillian Ko said, “The ACT is my worst nightmare. It is scary to think of not being able to really study for something so big.”

For other students, there is almost no stress when it comes to taking the ACT for the first time. Many students will take the ACT many more times than just once. In fact, 57 percent of those that decide to retake the ACT receive a higher score the second time. Studies show that only one in four students are truly qualified based off the ACT for college in every subject.

Student-athletes who have plans of going to college to play varsity sports are forced to get certain scores. Depending on the level of college athletics you plan on being a part of, minimum ACT scores change along with minimum GPA.

Senior Football player David Mann is now committed to play at Ferris State University and received a 22 on his ACT, which is above Ferris State’s requirement. This will allow Mann to fulfill his dreams. Luckily for Mann, he did not receive a score too low to play. Many of the nations beat athletes are unable to attend college to play a varsity sport like Mann.

When asked Loy Norrix juniors, Jillian Ko, Claire Dominick, and Abbi Danek are most worried for the science portion of the ACT because the science test isn’t based on something you have learned, rather it is how well you understand concepts dealing with tables and graphs. The science portion of the ACT is the test in which students score the lowest with the national average only being 20.8.

With March 5th less than a day away, juniors are trying to do everything known to ready themselves such as hire private tutors, take classes at school, or go online to take practice tests.

Although classes are being taken, juniors are ‘prepared’ for the rumored first bad score. Many college bound juniors expect to retake the ACT in an attempt to receive a higher score.