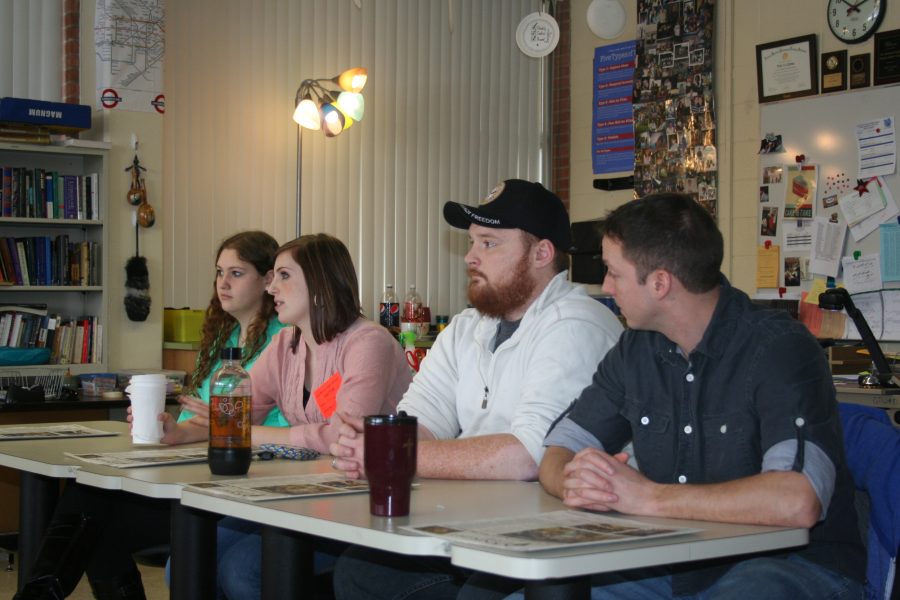 On Thursday January 28th, the Knight Life News team was visited by four participants of a group called Student Veterans of America. Three students from WMU and one from KVCC answered questions that the Knight Life staff had about serving for our country and being a military veteran. This club meets every Thursday to plan social events such as volunteering with senior veterans and 5K Veteran’s Day walks and runs. Jennie Brown is a secretary at the Office of Veteran Affairs and is on track for joining the Air Force herslef. As a student at WMU, Jennie is also very involved with the projects and ideas of the student organization. The Student Veterans of America also work along with Blue Star Moms all over the country, an organization that sends care packages to sons and daughters that are overseas on active duty.

Mike Morehouse, Emily Woodard and Terren Yosd were three participants that extensively shard their unique stories. Emily and Mike both grew up in Michigan. Terren Yosd grew up in Ohio. Yosd is a grad student at WMU studying Occupational therapy. His experience in the Air Force inspired him to want to work with war veterans who have been injured in combat. Although Yosd was never deployed out of the states, he still experienced basic training. The basic training experience was all about building the individual up and then breaking them down. The military takes pride in transforming their soldiers into the ultimate human being, prepared for the challenges that must be endured in war.

Emily, a Michigan native who studies at WMU, joined the Army Reserves to assist in paying for higher education. She has goals to eventually work for the federal government as an intelligence analyst. Her work in the Army a step towards this dream.

“It wasn’t an easy decision,” said Emily about enlisting. While away on deployment in Afghanistan, Emily admits that soldiers become “very desensitized.”

Even though Emily did not participate in combat, she was still faced with many frightening moments. For example, on multiple occasions her base was motored, meaning that the enemy would set off rockets that came unexpectedly, without warning. These powerful bomb-like rockets have the potential to harm an entire base.

“By the time it hits you, that’s when you know you’re getting attacked,” she said.

Mike, a student at KVCC who grew up in Michigan, enlisted when he was just 17. To Mike, joining the Army was a part of family tradition. He shared with us that just about every man in his family participated in the war, so for him it was a natural decision. While away in Iraq, Mike noticed just how much the war can affect someone.

“The whole sense of death leaves you,” said Mike. “You can’t be worried about yourself and if you’re going to die.”

As journalists, the Knight Life staff was curious about the effects that war had on these young individuals. It was clear that after speaking with them for an hour how much war life can change an individual’s daily outlook on life.

“I have a hard time talking to civilians who don’t understand what I’m thinking,” said Mike. He continued to tell us about coping with Post Traumatic Stress Disorder (PTSD). PTSD is something that many veterans of war suffer from. After facing such traumatizing things, many cannot escape the realness of combat. Each veteran deals with coming home differently.

“When I got back from Afghanistan, it was mostly just trying to stay busy,” continued Emily. “When you’re away you have to deal with people breathing down your neck the whole time.” Coming back home is just such a different experience and atmosphere,

Mike explained that while he was on deployment, the business of his schedule was unreal. When we asked about free time Mike had in Iraq he jiggled and said, “what free time?.”

“I operated 18-20 hours a day, when I got home it was ‘Call of Duty’; that’s all I did,” Mike continued discussing his life now that he was home. “The busier I stay, the calmer and relaxed I stay,” and that is how he copes with the change of being back in the United States and working through his PTSD.

As for the civilians of Afghanistan and Iraq, Mike and Emily were exposed to very different cultures.

Both Mike and Emily had to adapt to these cultures and religious ways while they were away on deployment.

The people of Iraq “would give you their shirt off their back,” said Mike. At times he found it hard to appreciate their kind nature because he never knew exactly who the enemies was. “You see the whole population as enemies because the Iraqi soldiers don’t wear uniforms,” Mike added.

Emily, who worked mostly with communication, had to interact a great deal with the Afghani army. Unlike Mike, Emily struggled to get the respect and attention she deserved because she is a woman in the Army.

“Islam is their whole life, and females have a very different role there,” she said, “This makes it very hard to work with them.”

Mike shared that his experience was life changing. “At 19 years old I had done more than most 60 year olds,” Mike said laughing.

Aside from the 2 minute long showers, 157 degree weather, sand storms and moments of terror, Mike lived for the brotherhood that he developed with his fellow soldiers and the occasional supply of Cheeze-It crackers that he admitted jokingly, got him through the war.

“My first year of deployment was the best year of my life; hands down,” said Mike. “I lived in a dark green tent in the middle of the desert” and when asked if he would go back? “Absolutely” he replied.