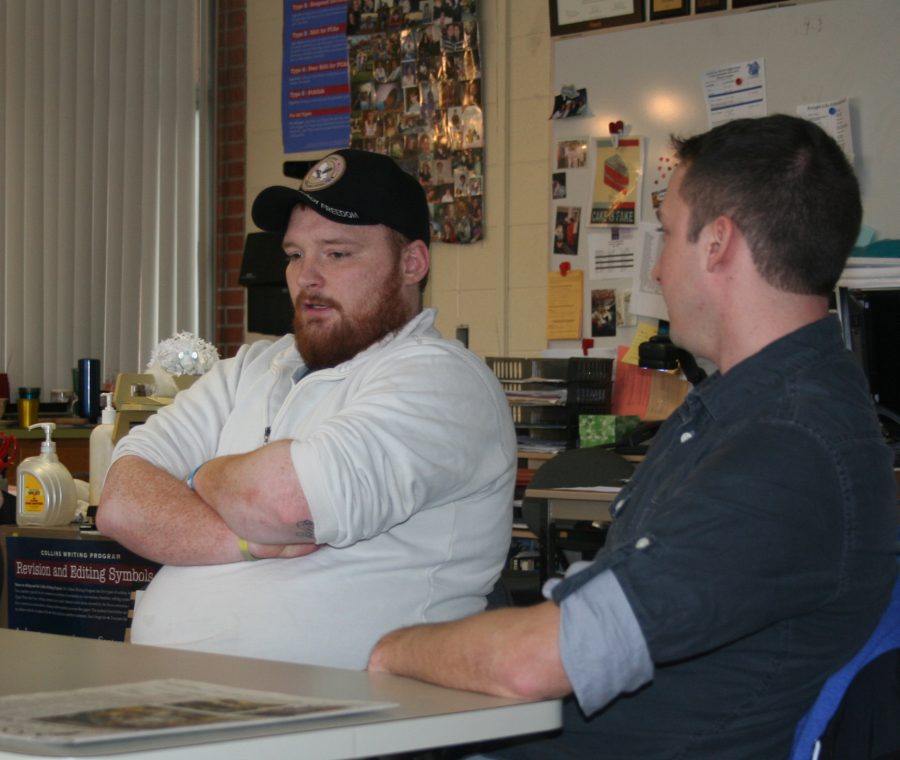 Photo by Sydnee Stannard Army veteran Mike Morehouse would return back to the front line any day, despite his struggle with Post-Traumatic Stress Disorder. The Student Veterans of America helps soldiers like Morehouse connect with each other.

Ever wonder what the day to day life is like for men and women who have served in the Iraq War? Well when the temperature gets up to 157 degrees and sandstorms can last seven days, it can get pretty interesting.

Student veteran at KVCC Mike Morehouse, lived in a large green tent most of his time while serving for the United States Army in Iraq. Using the bathroom every day meant going to a port o’ john and showers were two minutes long in a converted trailer. Only two minutes to conserve the little water they had in the desert.

For Morehouse, whenever he had time off from convoy security he would catch the few hours of sleep. Sandstorm ranging from a few hours to several days would cause the entire military base to stop all functions allowing soldiers to catch up on much needed sleep.

Morehouse used the Cheese It cracker to get him through his deployment. One of his favorite hobbies while serving in Iraq was eating his favorite snacks. His favorite time was visiting the Air Force base because they had the best “chow” in his opinion.

Being part of the war causes a lot of stress on the men and women of the military. Mike Morehouse is back from his tour in Iraq and his best method for dealing with his post-traumatic stress disorder is to play video games. PTSD is a psychiatric condition that commonly occurs after someone experiences or witnesses a life threatening event. Allowing him take his mind off of the war, video games like “Call of Duty” let him be distracted from the things that still bring him trauma.

“If you keep your mind active you don’t wander onto other things,” said Morehouse.

According to the U.S. Department of Veteran Affairs, PTSD is in about 11 to 20 percent of veterans of the Iraq and Afghanistan wars. Because of his condition, Morehouse is only able to sleep several hours over a three day period. Living with PTSD is troublesome and joining the Student Veterans of America is a large help.

Connecting with people is another problem for Morehouse. The Student Veterans of America help veterans of all types come together to talk about their experiences and connect through stories.

“You can’t really understand it until you really go through it,” said Morehouse.

For all military members day to day life is different from their perspective, especially when faced with PTSD after the war. Many have had the time of their lives and many lives have been changed, but most of all there are many people thankful for the sacrifices made for this country.