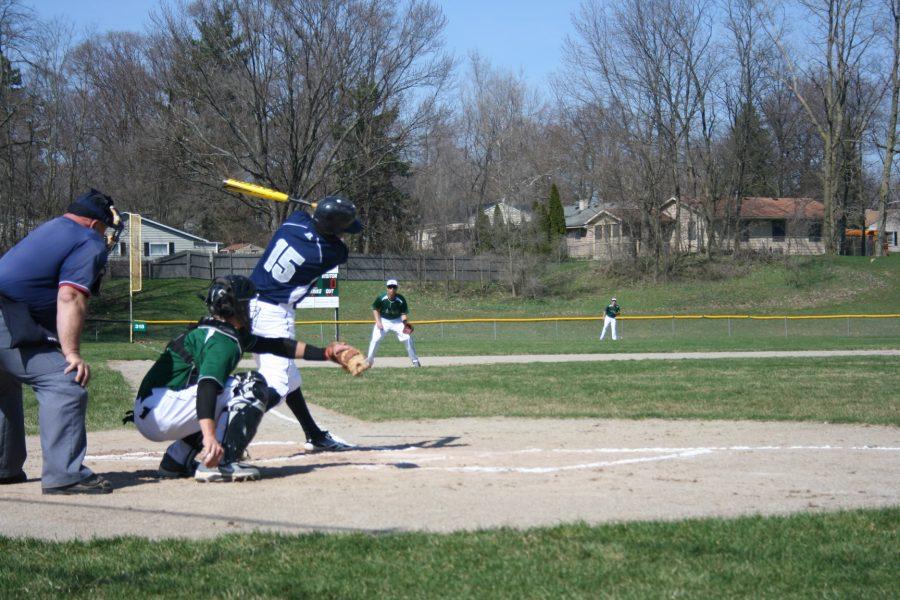 Photo by Mia Leibold Loy Norrix Senior varsity baseball player Thomas Hruska swings the bat at the Norrix varsity game against Hackett on April 22, 2013. Norrix falls with the final score 1-8, Norrix is now 1-2 on the season.

It’s about that time when the weather gets better and the flowers bloom, but for the baseball team they see it as a time for change here at Loy Norrix. The players are dedicated to work hard and rise up in the SMAC standings.

Coming off a rough 4-27 record last year, the Loy Norrix varsity team is working hard to improve that record and show they are ready to play ball.

“We just had a tough season, but we started working earlier to get better for the season,” said sophomore varsity baseball player Austin Thompson.

Being a second year varsity player, Thompson knows you need to work hard to be good and get better. The basics like hitting, throwing, and catching are needed to succeed, but now they work to improve on those while learning important parts of the game.

“After every practice your arm is sore from all the throwing, and even your hands begin to ache from all the swinging, but we all know it’s only going to help us,” said  freshman varsity baseball player Keegan Banks

Each practice involves throwing and hitting. Each player on average takes 100 swings per day and well over 100 throws. This year the varsity baseball team even spent several days in the weightroom to gain and build muscle. Without the work you can’t improve and that’s the main goal for this team, work hard and improve for the future.

Now it is time for a change, all the ball players said they are ready and willing to work hard for that precious championship by giving their all at practice and even putting in work after hours on their own to build on their talent.