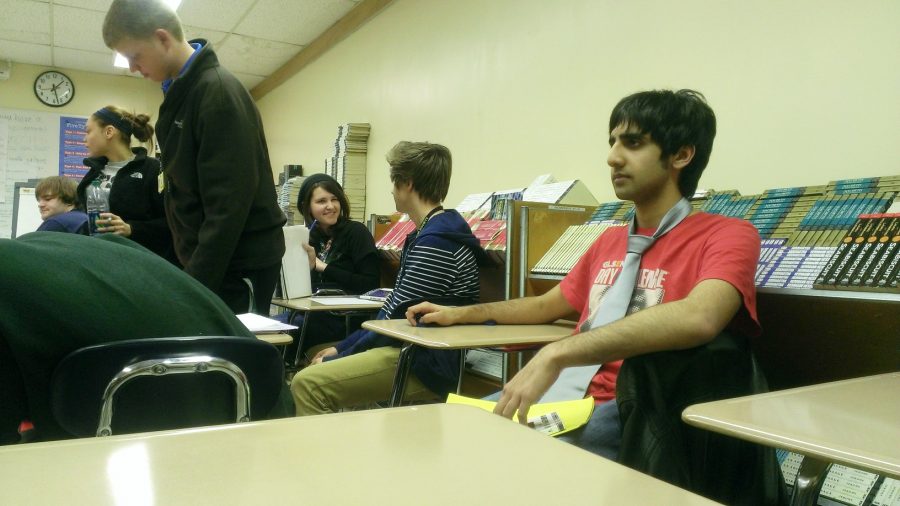 Photo credit Shakira Green Senior Haroon Chaudry participates in Day of Silence. It was difficult for him as everyone was speaking around him.

On April 19, 2103 the Lesbian, Gay, Bisexual, Transgender (LGBT) community participated in the National Day of Silence. The nationwide day is a way for the students to raise awareness about teen suicide, bullying, and self-harm for being LGBT.

The purpose of this day to remain silent for as long as possible and wear red to show support. The silence signifies how the LGBT population has had to be silent about their own lives.

Even though teachers are not able to stay silent during the day, they are still able to show their support.

“The fact that I am not silent on the day gives me the opportunity to share with all my classes about those who struggle in silence in the LGBT community because of the fear and intimidation,” said history teacher Arthur Williams.

Senior Lillian Slack has been participating in Day of Silence since freshman year.

“I participate to draw attention to those who have to stay silent because of persecution relating to sexual preference or otherwise,” said Slack.
Senior Haroon Chaudhry has only participated in Day of Silence for two years.

“It’s one of the few things that people can do collectively as a group that requires sacrifice, and I am willing to make that sacrifice,” said Chaudhry.
Chaudhry and Slack are two of the many Loy Norrix students who participated in the Day of Silence. There are questions as to why the LGBT community stays silent rather than actually speaking out about it.

“I think it’s a contrast between how vocal we usually are with protests and everything,” said Slack.

At the end of the day many schools and organizations have breaking the silence events to reflect on the day and explain their reasoning for participating.

Immediately after school on the 19th there was a breaking of the silence conducted by the president of GSA senior Olivia Lyszyk. GSA also has meetings every Friday in Williams room K-14. Everyone is welcome.