America’s Pastime: Scott May Bats His Way to Bliss 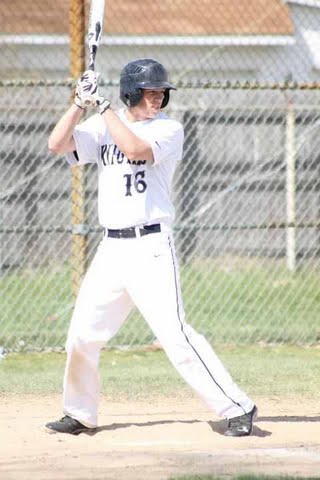 Sophomore Scott May awaits the pitch. Scott attempts to lead the Norrix team in the 2013 season.

There he stood, staring out at the field, the sun beating down on him. He readied his bat, preparing for the swing that could make or break the game. Adrenaline and nerves were high as he swung, and the ball flew forward, but a bit too far to the left, a foul ball. He tried again and got the same result. Two strikes, one to go. He raised the bat, the pitcher threw the ball towards him. He swung, and missed the ball, a strike-out. The game could be jeopardized, maybe not, but no one really cares. Baseball isn’t about winning, it’s about the fun of the game.

Sophomore Scott May, from Loy Norrix High School is a baseball veteran, playing since age 3 and he does it for the fun, not for the competition. Because of this experience and skills he’s picked up along the way, May was able to make it onto the varsity team in his freshman year.  For May, baseball is a way to get away from the stress of school, social life, and anything that may be on his mind.

“You don’t really have to worry about anything,” said May, “you just enjoy your teammates.”

May plans to go on to a career in orthopedic surgery after high school and college, but for now, he’s enjoying life at Loy Norrix with friends. Life is simple, life is good.

May’s last season was a bit harsh, with only a few wins in the whole season, and a bad knee injury. Through all this however, he still had a ton of fun.

America’s pastime, the great game of baseball, is relief from the stress, aggravation, and daily troubles of life for May, along with many others, such as Drew Pawloski.

Pawloski said, “I’m a baseball player, not an athlete, there’s a difference…The feeling of diving for a catch and getting it is awesome. Hanging with friends, making the catch, stuff like that…baseball is fun.”