Loy Norrix Master Singers Work Their Way to the Top 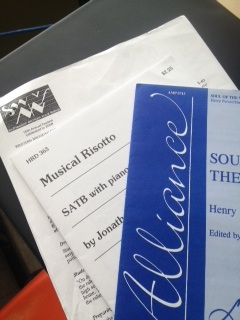 “Hot bright lights are beaming down on me. I start feeling shaky. It’s show time and there is no turning back. I start praying that all the practice we had done would pay off,” said junior Amyre Dennis.

All thirty of Loy Norrix Master Singers went to the Southwest Michigan Vocal Festival (SWMVF) on Wednesday, March 13th. This year it was SWMVF‘s 75th anniversary.  SWMVF is one of the oldest and largest choral festivals in the United States.  There were over 900 students that represented 21 schools in Southwest Michigan that participated in the festival. The practices and performances were at WesternMichiganUniversity.  Every choir that entered had to learn five songs. This year the songs were “Somewhere,” “Songs of the Fleet,” “Turkey in the Straw,” “Sing All,” and “Dixit Dominus.”

Each school’s choir had to learn the songs individually. All the choirs came together the morning before the performance and rehearsed the songs with conductors who aim for perfection.   After a hard day of practice, the students were given a break.  They left to get dressed in business casual attire.  When they returned it was show time at Miller Auditorium.

SWMVF was not just about the performance, it was a learning experience that allowed the participants to sharpen their voice and performance techniques.  “SWMVF helped me improve my vocal skills,” said Courtney Prescott.

Tyrrell Wilks-Williams said, “SWMVF really helped me learn how to read music at a new level.”

Prescott and Williams were two of the Loy Norrix Master Singers who experienced SWMVF.

Both the participants and the audience were amazed by the huge number of vocalist and the fact that they all had different teachers, yet each section sang as single voice with one conductor. .“Singing with a bunch of singers from so many different places and having our voices come together as one is just beautiful.” said Dennis. Dennis is one of the few Loy Norrix Master Singers who not only participated in SWMVF but also participated in honors choir

This year the festival was honored to have the United Kingdom’s world famous   conductor Simon Carrington as its guest.  Carrington is the co-founder of the internationally acclaimed British Vocal Ensemble the King’s Singers.  He has given over 3,000 performances at the world’s most prestigious festivals and concert halls and made more than 70 recordings.  He is very well known and wants his performers to “make music” not just sing.

SWMVF honors choir is made up of students already enrolled in SWMVF that want the extra challenge. There is more to the selection process for honors choir than one might think.   In order for high school students in Southwest Michigan to get into honors choir they have to audition.

Each choir selects at least 2 people for each vocal part from their schools for the audition.  As a group, they sing two or three songs in front of judges who determine who will go on to perform in the festival. This is very difficult as a choir because you have to make sure everyone sounds good in the group because you are auditioning as a team.

Dennis is one of the few Loy Norrix Master Singers who not only participated in SWMVF but also participated in honors choir “Being in the honors choir has benefits,” said Dennis, “If you plan to go to Western Michigan University and continue with the choir you have the opportunity to meet and work with Western’s choir directors, you also have a chance to perform on the stage used for choir performances at Western.”