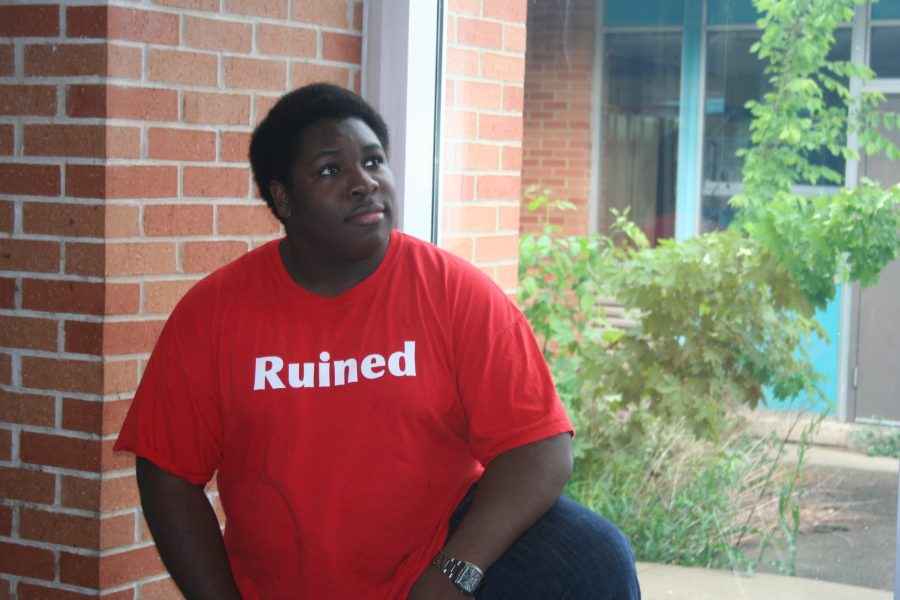 ﻿Photo by Paul Vallier Sidney Ellis shares his vibrant personality with his peers at lunch. He participated this year on the forensics team and the school play.

My ears buzzed with the echo of the beat my hands played on the drum below me.   The tone for my story was set now. I took a deep breath and immersed myself in my character. I make face come to life and that’s where my story begins,” said Sidney talking with his hands

Sidney Ellis II has grown up in the household of Sidney Ellis and Renita Ellis. They both play a big part in their church home ChristianLifeCenter.

Sidney’s dad works with the entertainment and media at the church for the adult and youth ministry.  He has made the biggest impact in the children’s ministry with his videos, skits and puppet shows. These performances have enticed the children and allowed them to enjoy their Sunday service in a not so average way. In order to put videos, skits and puppet shows on he asked the older youth to get involved teaching them to be the stars of the shows.

As Sidney Ellis II experienced this he started to follow his father’s footsteps. He took an interest in the arts. He now works with middle school youth at church and helps liven up their class every 2nd and 4th Sunday. His skills in the arts haven’t only helped him at the church; they have helped him spread his name into the community.

Father Sidney Ellis said, “I am very proud of my son, I am glad he has an interest in what I do. I can see the passion in his eyes.”

As a freshman this year he participated in ACT-SO, which stands for the Afro-American Cultural Technical and Scientific Olympics.  This Olympics was created by the National Association for the Advancement of Colored People.  Every year, all across the country, different branches of the NAACP compete in many categories like visual arts, performing arts, and etc. The competition is set up like the Olympics, so students are awarded gold, silver or bronze. The gold medal winners from each branch get a free trip to the National Competition, which will be held in OrlandoFlorida this year.

“I get nervous before I perform, but I’m doing what I love, so I forget about that. After I perform I feel relieved but confident that I did everything I could to impress the judges, “said Ellis

Sidney did a piece that won a gold medal on Saturday April, 13th 2013. He competed in the performing arts category. His act was a drumming and storytelling piece called, “The Signifying Monkey.”

Sidney Ellis said, “When my son is performing I can tell he is engaging his audience, I love to see the crowd get intrigued and begin to participate.”