Guest Article: Love Your Sibling For Who They Are 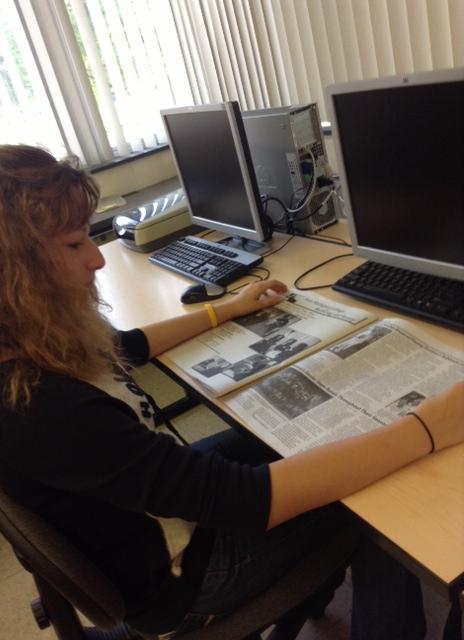 Photo by Tasia Heintzelman Hannah reads Knight Life at school for her own enjoyment. While at home she bonds with Paige by reading together.

Hannah Putkamer Moved to Kalamazoo for a number of reasons; The Kalamazoo Promise, Mom’s new job, and most importantly better schooling for her sister Paige.

Paige was diagnosed with Microcephaly in 2008. She now attends Woods Edge, a school that provides learning for children with special needs.

“Not everyone gets to experience her, she’s unique,” said Hannah.

Microcephaly affects 2 to 2.5 percent of the entire population, according to the Foundation of Children with Microcephaly. Microcephaly is a condition where the circumference of your head is smaller than normal.

Just like any sibling relationship there are everyday challenges that Hannah and Paige have to face, whether it’s a fight over who gets the bathroom next or whose turn is it to watch T.V. As Hanna still deals with those problems, and she has to face different ones as well.  Hannah speaks with her sister through sign language, and although Hannah only knows a little, she tries her best to learn more every day. Hannah says it can be hard at times because Paige can get a slight temper.

“Paige is not easy to get along with. She will bite, kick, hit or spit if she doesn’t like what you’re doing,” said Hannah.

Despite the fact that Hannah sometimes has a rough time getting along with Paige, they both like doing things together that makes them happy.

“I like to take her for walks. That always relaxes her. She likes to be read to, she doesn’t understand all of what you’re saying but she’s a good listener,” said Hannah

You can tell Hannah loves and cares about her sister. The light in Hannah’s eyes or a smile on her face when she tells a loving story about Paige brightens up the room.

Hanna worries about her sister and really cares for her. There are some things that Hannah thinks about every day.

“Whether [Paige] will progress in her learning… A constant worry would be if her head stops growing, [and] when to expect the worst,” said Hannah.

Some advice Hannah has given for sibling relationships is to.

“Try to see their point of view, [and] don’t fight a lot. Try to get along,” said Hannah.

Some people take their siblings for granted. Next time you see your brother or sister tell them that you love them or give them a hug. Find something you like to do together and do that special activity every once and a while. Maybe it could be as simple as a walk like Hannah and Paige. You never know what the next day looks like for them. Love your sibling and let them know.