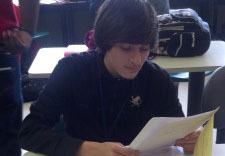 Can you imagine the pain of a seven month old that got his lip burned by his babysitter with an electrical wire only because she was mad?

It has been seventeen years since this incident. Marcus Torres tells his story.

“Every time that I go to sleep I can remember her yelling at me, so I can stop crying,” Torres said with a sad voice.

Years have passed and his mom Ruby Cruz and his grandma still regret giving the babysitter the job. In other words, giving her the chance to take care of Torres.

“I saw my mom with my grandma crying saying if we would had the chance to go back to the past we would change it,” Torres said with his eyes watering.

Torres has been enjoying Varsity basketball on the Loy Norrix team. He will never forget all the things that have happened to him.

One day while he was playing basketball with his friends, he saw a little boy getting jumped by six guys; the little boy couldn’t defend himself.

What would you do if you were in Torres position? Would you run and help the boy, or would you just stay and watch the guys beat the boy?

“I wish I could have helped the boy but I was scared of getting jumped by them,” Torres said with a worried voice.

That moment Torres’ memory came back of what happened to him, he heard yelling and screaming.

“I wanted somebody to stop the fight, the memory of what happened still haunts me from this day forward,” Torres said.

If you have a baby and you’re looking for a babysitter be careful of who you are going to leave your baby with.

“As a babysitter my mother trusted you with her children and you broke that trust by touching her son.”