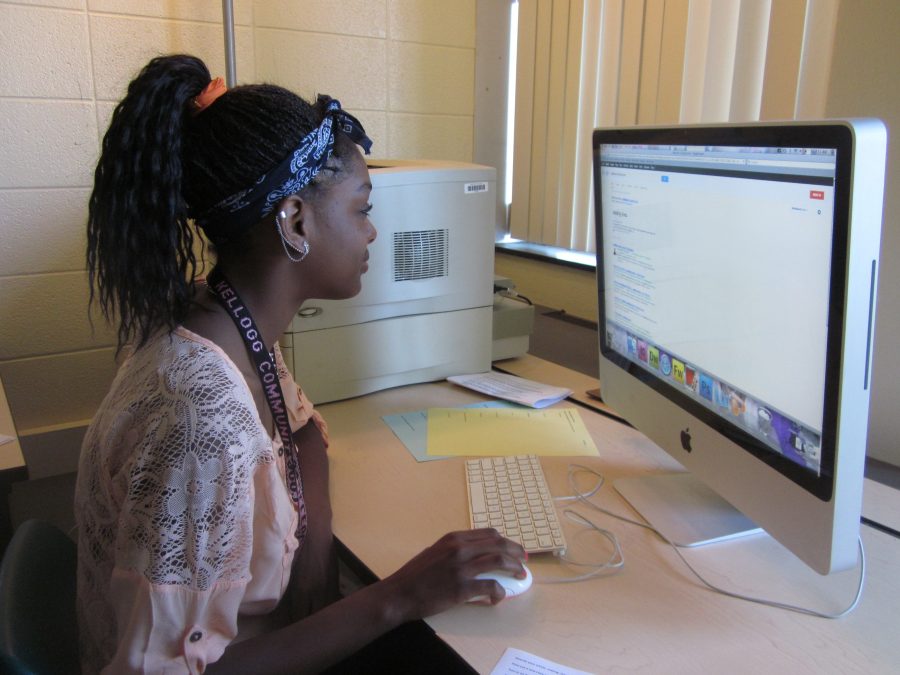 Photo by Leslie Hemenway Jazmyn Jackson is a devoted student, in addition to being a cheerleader. Here, she is looking up information in Ms. Pankop's journalism class.

“It’s not like it seems in movies, you’re not popular and you don’t walk through the halls and everyone knows you. But for the most part it’s the same, there’s still drama and there’s still a leader of the cheerleaders,” said Jazmyn Jackson.

Jackson, age fifteen, made the junior varsity cheerleading squad this past fall. She admitted she didn’t think she was going to make it because of her lack of knowledge on the sport. Jackson didn’t know it at the time, but it was going to be a lot more intense than she imagined.

“We had to run the track and run up and down the bleachers on each side,” she said, recounting her worst moment on the squad. She found it unfair when she and her peers had to do extra laps, but complied to stay on the team because being a cheerleader was something she wanted ever since she was little.

Compared to the varsity squad, Jackson believes junior varsity had it much easier.

“If varsity messed up, [Coach] would make them drop down and do push ups,” she said. Junior varsity, meanwhile, was forced to do that only once or twice throughout the entire season.

According to Jackson, the flyers didn’t have it any easier than the varsity squad members. A flyer is a cheerleader who goes into the air. While Jackson herself wasn’t a flyer this past season, it was clear she had great respect for them, and it’s easy to see why. Flyers are the ones who stand proudly atop a pyramid of their peers and are occasionally catapulted off, relying solely on their teammates to catch them. The ending results of a move like this could be either eye-catching or catastrophic. With this in mind, it’s no wonder why broken arms are one of the most common injuries for cheerleaders, according to the website cheerleading.about.com.

This doesn’t intimidate Jackson, however, as she plans on cheerleading next year. Because fall cheerleading took up a great portion of her time, she has decided to cheer at basketball games instead.

Despite the time it took up, cheerleading never got in the way of school. Jackson recalls that she had to maintain a certain GPA in order to stay on the squad, so that helped motivate her to stay on top of things. According to the website cheerleading.about.com, around 83 percent of cheerleaders maintain at least a “B” GPA so they can stay on the team.

Even though the practices were rigorous and the effort required was huge, Jackson fell in love with the sport.

“The first couple games I was nervous, but after a while I started getting more used to it,” she said with a smile.

It was like nothing she had ever experienced before. She remembers the grass was always freshly cut and wet, and there were always bugs buzzing around her and her squad. It’s clear by the light in her eyes that she looks back on those games fondly. The only thing she recalls with a hint of disdain are the push ups she and her team had to do whenever Norrix scored a touchdown. Her coach demanded that the squad do them, though, so she obliged.

Regardless, Jackson believes cheerleading has definitely changed her for the better.

“It’s made me not as shy as I used to be. It’s made me feel better about myself because I actually made the team,” Jackson said with a smile.