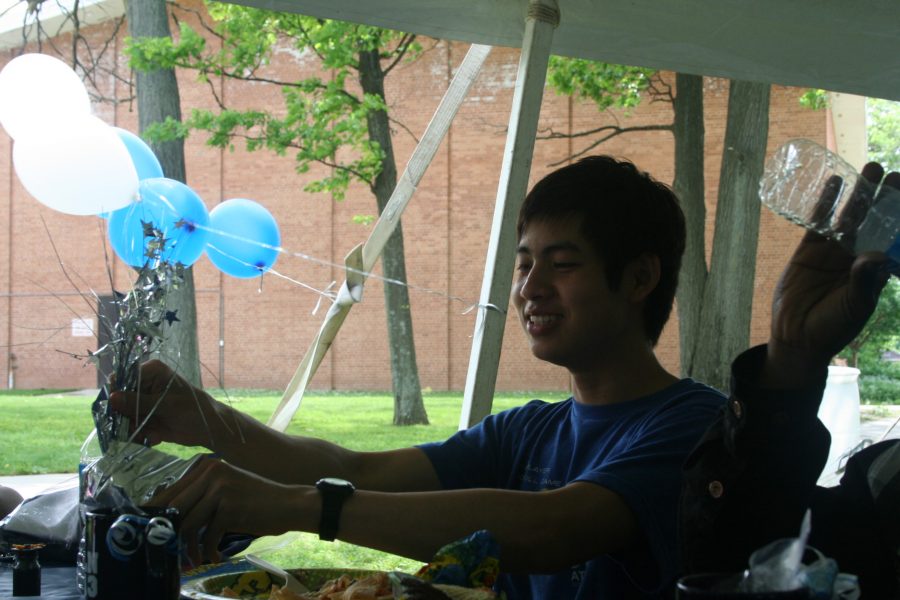 Foreign Exchange student Chatpong Paripurana celebrates the year at the Senior Luncheon on May 31, 2013. Paripurana hails from Thailand where he especially enjoys the outdoor activity of fishing.

Walking through the crowded halls, he doesn’t see a face he recognizes. All around him people are obnoxiously filling each other in on the summer’s gossip. Others are too busy to notice anything but the image on their phone screens. The words coming from the mouths of the people sound like an alien language.

This is what foreign exchange student Chatpong Paripurana went through on his first day of school.

“I almost cried because my language was so poor,” said Paripurana.

Last year over 750 thousand exchange students attended school in the United States. Paripurana, like many other foreign exchange students had trouble adjusting to high school here in America. It was as if he set foot on an alien planet called Loy Norrix. His first two days were the most troubling.

“I didn’t know how to have lunch here,” he confessed with a smile.

It took him three days to figure out how to survive the jungle of the Loy Norrix cafeteria.

But some things are universal from culture to culture. Paripurana found this out on a fishing trip on Lake Michigan. The vast open water and big boat were unfamiliar to him. He fished in canals in his home country of Thailand using mainly bamboo poles. Lake Michigan was a different experience for him. He hadn’t fished on a motor boat before. He preferred the safety and stability of the shore. The weather had a large effect on his first American fishing trip.

“It was cold, tall wave make me feel like throw up,” said Paripurana.

However, he had lots of fun despite the poor weather conditions. He caught the biggest fish of his life, but Paripurana still likes fishing better in his homeland.

“It’s convenient to go in Thailand,” he said. “I don’t need  license. No fishing license in Thailand.”