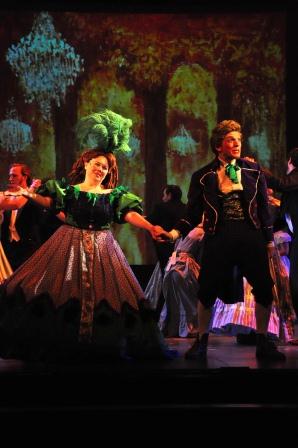 Although you may think that there is great drama in the hallways of Loy Norrix, the REAL drama around here happens on stage, either in Kasdorf Auditorium or at the Civic Theatre.

There is not another atmosphere quite like that of a musical, and the Civic Theatre’s production of the historic French novel “Les Miserables” is no exception.  The acting was great, the singing was beautiful, and there were plenty of moments in the play that touched the heart.  The production will run on weekends until October 27, and marks the opening of the Civic’s 85th season of community theatre in Kalamazoo.

“I first saw “Les Mis” when I was eleven, and it made me fall in love with musical theater,” said Weeks.  She teaches drama and forensics at Loy Norrix and is co-directing the next school musical, “Young Frankenstein.”  In addition to her time spent working at Loy Norrix, she acts in Civic Theatre productions.

“It’s nice for the kids to see that I do what I teach,” Weeks said.  She encourages students to go and see productions at the Civic.  In “Les Miserables,” Weeks plays Madame Thenardier, an innkeeper’s wife who provides much-needed comedic relief to the otherwise dark tones of the musical.

“The whole point of theatre is to make people feel something, and with “Les Mis,” you can really tell that the audience is feeling it,” said Santamaria.  “Les Miserables” is a tragedy that really digs into the audience’s feelings.  The characters are designed capture the hearts of the audience, only to be taken away by a series of tragedies. The production at the Civic Theatre does each and every character justice.

“You can feel the energy of the audience and their responses to what happens on stage.” Santamaria said.  The production of “Les Miserables” was held over for three additional weekends.

The Civic Theatre has a very long-standing reputation as one of the most professional and smooth-run theatres in the Kalamazoo area.

“Kalamazoo is a small town with really great theatre,” Bradford said.  Kalamazoo is littered with theatres, with the Civic at the top of the list.  The Civic has survived for 85 years on entirely volunteer casts, and very few paid employees.

The Civic’s 85th season continues with its next production, “Peter Pan,” which will run from November 29 through December 15th.

You will have one last chance to see “Les Miserables” this weekend, on Friday, Saturday, or Sunday.