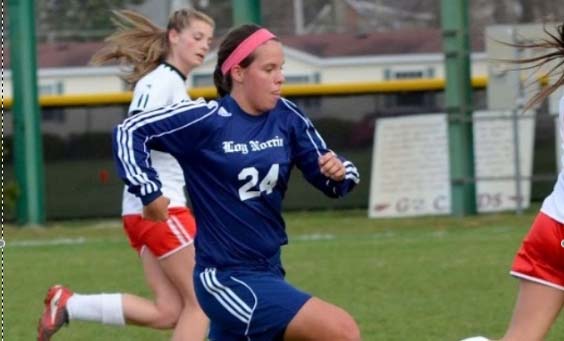 “It’s kind of like a drug, it gets really addictive. When I’m on the field and I’m scoring, it just feels so great, and I don’t want that feeling to end. I just can’t get enough,” said sophomore Julie Zabik.

For Zabik, there is no other life than soccer. The adrenaline, the teamwork and the overall experience just keep tugging her back.

When she was younger, Zabik and her sisters were given a choice between soccer and multiple other sports, but there is something extremely extraordinary about her love for this sport. She has been playing for twelve years, since she was four years old.

“I don’t think I’ve ever thought of just quitting and stopping. I mean, sometimes it gets intense, and it feels like it’s not worth it,” Zabik said. “There’ll be some days where I do so many wind sprints I think I might die, that I’m actually torturing myself to do a sport, but then when I get in the game and I sprint and score that goal, I know it’s all worth it.”

There are some drawbacks to her love of soccer, however. “I’ve always sprained my ankles, I have really weak ankles,” she said.

She started using braces, but they got in the way of playing and were clunky. She used athletic tape, but after a while, constantly taping her ankles got expensive.

“After a while, my parents said they would take me to physical therapy. It really helped, even though it was difficult,” said Zabik. “Going through the process, I saw that being a physical therapist wasn’t just sitting down and writing, it was getting up and being active in helping those in need.”

Zabik is considering becoming a physical therapist after college, or a team doctor.

On the field, Zabik definitely keeps her strengths and weaknesses in check to have a better game.

“I’ve never been the fastest player on the team, but the advantage I have is, in the long run, I have more stamina than a good amount of the players,” she said.

Her work ethic, although, is what makes her such a dedicated player.

Zabik’s commitment to soccer has taken her far – in fact, across the country. She’s been to multiple states and cities, including Disneyworld. The thing that is most interesting about traveling to different places is the environment, both the weather and the people.

“It’s kind of crazy because in Michigan, sometimes the team has to practice in 30 degree weather,” Zabik continued, “And then two days later you’re in Florida playing in extremely hot weather. It really throws you off when you’re playing. You really have to adapt, which is kind of hard. You can also tell the differences in teams from other states are against you because they have completely different playing styles and personalities, which is a big part of the game.”

Of all the places she’s been to, Zabik’s most memorable was the U.S. Women’s Nationals in Detroit. She felt happiest there, and it was extremely exhilarating.

“I had so much adrenaline, so it hadn’t really hit me until later how happy I was,” Zabik continued, “I was 5 feet behind the player who scored the Olympic winning goal, it was almost surreal. I didn’t grasp what was going on because there were all these people that I looked up to right in front of me.”

For Zabik, life without soccer is not as fulfilling, not as exciting. She knows that no matter where she is, on or off the field, it’s always a necessity, and incredibly important to her.