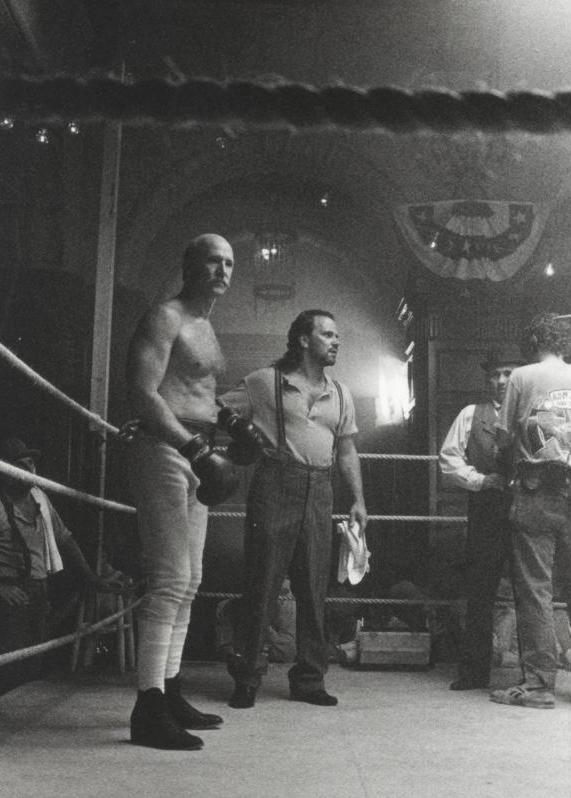 Robert Pincus as an extra in The Gambler V: Luck of the Draw.

Loy Norrix teacher Robert Pincus feels as if he has lived three different lives. Pincus has worked in KPS since 2001 and has been teaching at Norrix for six years.

Before Loy Norrix, Pincus worked in law enforcement. He worked for the Atlantic City Police Department and worked on some investigations with a DEA task force. He was on the streets for fifteen years in some of the toughest areas in New York with the job of jailing dangerous criminals. When not arresting criminals, Pincus had a positive impact on many lives.

Pincus said, “One time I delivered a baby during a snowstorm when the ambulance was not able to get through the city.” Pincus also explained how he had the opportunity to save a few kids from a fire.

These are just a few examples of how Pincus has been able to provide comfort for many people. He values these opportunities greatly.

In 1984, Pincus was given an assignment to provide security at a hotel in Atlantic City for country singer Kenney Rogers. Rogers was impressed with Pincus and asked the Casino executive if he could take Pincus from his job. The casino owner informed Rogers that Pincus didn’t work for him. Rogers realized that Pincus was working in law enforcement.

Pincus did not know a lot about country music and decided he was not comfortable quitting what he was doing to work for Rogers.

About a year later, Pincus was injured in the line of duty. He was executing a search warrant for a drug dealer in Atlantic City. He went out of a window with the suspect and landed wrong. It was not a high fall, but he still injured his back and neck.

Pincus was looking at the possibility of spending the rest of his career off of the streets, which he was not thrilled with. At the time, Roger’s brother had been keeping in touch with Pincus and talked with him about his injury. Rogers found out about it and sent a jet to New Jersey to pick up Pincus. He flew him up to Canada.

Kenny offered him a job again.

After discussing this with his family, Pincus decided it was “time to come out of Law Enforcement” and spent the next seventeen years as head of security for Kenny Rogers.

The Kenny Rogers band traveled all over the world doing concerts. Rogers performed on almost every continent, including Japan and South America.

Rogers’ made several movies and Pincus accompanied him during the filming. “The Gambler” was a series of movies that Rogers starred in that aired on television. The series was very successful and was nominated for an Emmy.

Rogers also made guest appearances in TV shows like “How I Met Your Mother.” During the time when they were out on the movie set, Rogers would have Pincus put on a costume and Pincus would appear as an extra in the movie. He got paid around eighty dollars a day. If Pincus had dialogue in the film, he would get around four hundred dollars a day.

Another person Pincus was able to spend time with was Bill Clinton. He was president at the time. Rogers did the inaugural for Clinton for two years. Pincus spent time with Clinton and Rogers in the White House.

Pincus took on another title as a vice president of productions at one time and said it was, “Just a title Rogers gave him in order to offer him more money.”

In 1997, a lot of things changed for Pincus. He was given custody of his own son, Jon. Rogers and Jon were living in Vegas while Pincus was going through a divorce. He had two older boys and when he got custody of Jon, he didn’t want to miss him growing up. Pincus retired from his job with Kenny where he was making over six figures. He decided to go back to college. At 47 years old and his goal was to graduate college when he was 50.

For three years, Pincus delivered pizzas and threw newspapers. While working his way through college, he refused any help from his family or Rogers. He got his teaching degree in 2000 and taught for a year in Las Vegas.

Pincus met a girl in Kalamazoo about twenty years earlier at Wings Stadium during one of Rogers’ concerts. He realized Vegas wasn’t the right lifestyle for a single dad. So he had an interview in Kalamazoo and got hired in 2001. He moved to Portage and married the girl that he met at the concert. They became a blended family of five.

Pincus remains friends with Rogers and stays in touch with him still.

Pincus said, “Although it was a great lifestyle, I wouldn’t trade the time and experiences I was able to spend with my family for anything.”

These experiences Pincus has had make it easier to connect with his students at Loy Norrix.

Pincus said, “There is a genuine interest in law enforcement for most students. They watch T.V. shows and get glimpses of law enforcement.” When he has the opportunity to bring up his experiences, his students have a tendency to listen more.

After making a connection, his students don’t just see him as a regular teacher anymore. When he is able to make a connection, Pincus said, “It takes the glitz and glam away and they realize there are emotions.”