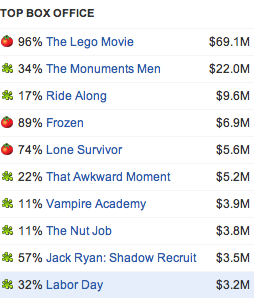 With so many long awaited films hitting the box office in the past few weeks, one film was built above the rest: “The Lego Movie.”  Directed by Phil Lord and Chris Miller, directors of the recent 21 Jump Street remake, “The Lego Movie” is an ingenious combination of stop motion Lego figures and CG animation to make Lego flames, smoke, and water.

The film opens on an eerily Orwell-like Lego society, with “Big Brother” Lord Business (Will Ferrell) watching every habitual move of every obliviously elated, conforming citizen. His first line in the film, given from the Lego equivalent of a telescreen,  exemplifies his power “Hi, I’m President Business, president of the Octan Corporation and the World. Let’s all take care to follow the Instructions (or you’ll be put to sleep).”

This introduction outlines procedures similar to those of Orwell’s novel “1984,” creating “unpersons.” The Octan Corporation (parallelling Orwell’s Party) monopolizes most industries, from television to music. Octan’s propagandistic “theme” song of the movie, and every citizen’s favorite song “Everything is Awesome,” instills in the minds of the citizens a subconscious submissiveness, in order for President Business to complete his devious design: to solidify every brick, every building, and every figure, in order to perm his “awesome” society.

One night, when all of his fellow constructors go out for a drink, Emmet notices a figure scurrying around the work site.  He goes to investigate and ends up in a police chase with Wyldstyle (Elizabeth Banks), a Master Builder. She escapes with him to the secret hideout of the Master Builders, (not unlike the Oceanian Brotherhood) where he is introduced to Vitruvius (Morgan Freeman), the unofficial head of the Master Builders.

Alongside these two are Lego Batman (Will Arnett) and Benny (Charlie Day), an astronaut from one of Lego’s first plastic sets as well as a loyal, crazy hybrid unicorn-cat companion Unikitty (Alison Brie). The goal of the Master Builders is to revolt against the Octan and President Business’ tyrannical, monopolistic leadership and to keep creativity alive.  By disobeying the instructions, and using their abilities to create unique, individual structures, the Master Builders plan to stop Business’ maniacal plan.

The Lego Movie combines the perfect amount of appropriate humor, animated intensity, and easily-understandable themes, which the whole family can enjoy!  This film also introduces the theory of an omnipowerful, dystopian government to children in terms and ideas that children can comprehend, creating not only an enjoyable movie-going experience, but also a sense of catharsis in the viewer.

Story writers Dan and Kevin Hageman have the capability to create an antihero, or a triumphant protagonist in unlikely circumstances, but whether Emmet is  is not spoiled in this article. See for yourself.  Making $69.1 million in the first week at the box office, “The Lego Movie” should be in theaters for a long spell. As most critics agree, everything is awesome.