Those Two White Guys from “Whose Line is it Anyway?” 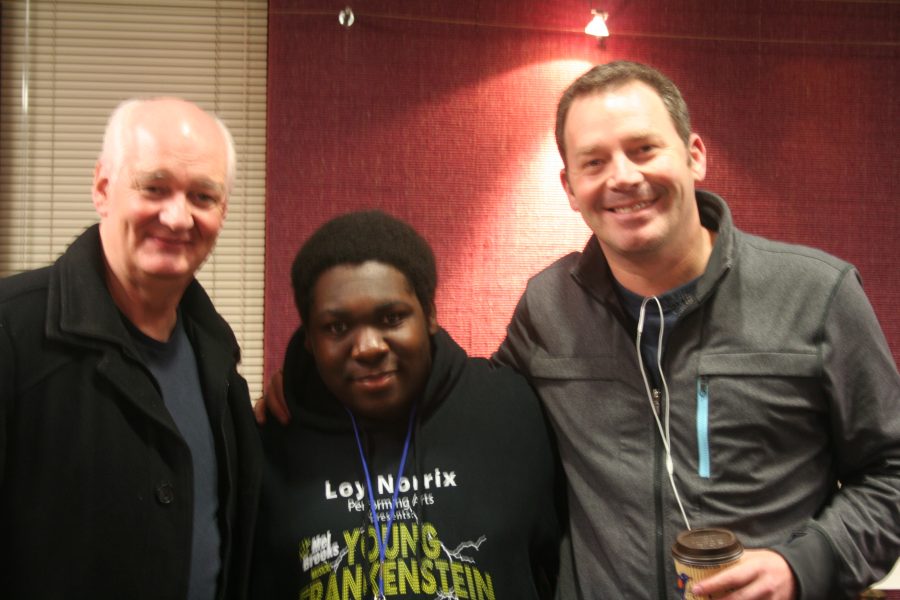 Here we see Loy Norrix sophomore between Colin Mocherie (left) and Brad Sherwood (right), in the Greenroom of Miller Auditorium before their two man improv show.

When you hear the names Colin Mocherie and Brad Sherwood you think of…of…well not really anything. But when you hear about ‘those two white guys from the most watched improvisation show known as “Whose Line is it Anyway?”’ that’s when the lightbulb goes off in your head. Colin and Brad are most known for being cast members on “Whose Line” but they have been doing improv for a while before “Whose Line” came along.

When Sherwood began it wasn’t possible to actually make a living out of doing improv. “When I was in college I saw my first improv group and thought it was amazing and hilarious.” Just like Mocherie, Sherwood hated doing stand-up comedy “It was too scary and hard for me.” But when you see these two get on stage and pull a random card and make an entire 10 minute scene from basically nothing, you’ll understand why they are the such the legends they are known to be.

In their two-man-group, for the “Whose Line” fans, you’ll see a couple of games you might remember from the show, such as “Living Furniture” and “Sound Effects.” In “Living Furniture,” Colin and Brad pick two random audience members to come on stage and put on jumpsuits. Then during whatever scene Colin and Brad start making up, the chosen audience members have to become whatever object that appears, according to what Colin or Bradley needs. In the game “Sound Effects” a mic is passed around through the audience, and whenever Colin or Bradley gives a certain signal the person holding the mic has to give a coordinating sound effect. These are a few of the many ways the two bring audience participation into the show.

Loy Norrix was represented in the audience during the show. Andy Santamaria, Captain of Norrix’s improv team known as “IT,” said he loved the show.

“It was really funny. I’ve seen ‘Whose Line’ so I knew they were good, but seeing them live it just affirms the fact that they are quick on their feet.”

Now when you hear the names Colin Mocherie and Brad Sherwood, you’ll know that these are the two hilarious genius’ that can make the funniest of scenes from the smallest of suggestions from random audience members. More than just those two white guys from “Whose Line.”