Another Year in the Veterans Affairs’ Medical Center 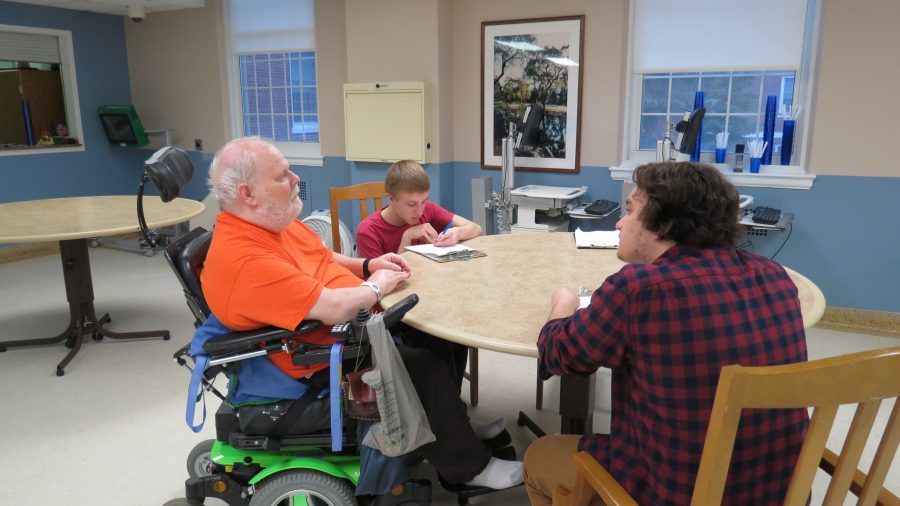 Photo by Sveri May Here we can see some students interviewing one of the veterans and writing all the information that he is giving to them. Most of the students were interviewing in the big auditorium but some students (including them) had to move to another rooms because of their veterans difficulties to move.

Everybody has heard about wars and their effects, such as devastated countries, injuries, broken families, loss of lives and money… Wars are never easy to remember, mostly for those people who have lived them. The veterans of those wars have a lot to tell us about them.
On April 3, Loy Norrix students visited the Department of Veterans’ Affairs Medical Center in Battle Creek. The reason of this was a  U.S. History project which has been done for more than 20 years; the Living History Project. In this project students have to interview one veteran and write a whole notebook about his/her life. They will keep one copy of the notebook and give another one to their veteran. This project will count on the students final grade in U.S. History class, and it will also be a completely new experience in their lives.
”It changed my mind. I really enjoyed the experience,” said senior Laissa Campos Reis, exchange student from Brazil.
The students have been preparing for this trip in different ways. They watched videos, listened to Sveri May’s information about it and read some of the questions that they could ask, questions like “what branch did they served in?”
Students arrived to the VA on April 3rd at around 10 a.m. and they were sent to a big auditorium where all the veterans were waiting impatiently. Students formed groups of four people and each group had their own veteran to interview. Veterans from the Korean War, Vietnam War and other issues were present, but only two women were represented.
Students asked all kinds of questions to their veterans, about their childhood, their family and  their scariest moments.
The students will use all the things that the veterans said and some research work to fill their notebooks. All the students will come back again next month to have lunch with their veterans and give them the notebooks that they wrote about them.
This project is an initiative of the teacher Sveri May and the History teachers Sean Bergan and Richard Rashad to encourage students to know more about the histories of those veterans who have been involved in different wars. It’s a really recommendable and enjoyable experience for Loy Norrix students and also for the veterans, who liked to see all those students listening to their words.
“It was fun. I learned a lot about my veteran,” said junior Darreon Martin. ” He was a sergeant of first class and he built the first M1 tank.”
“ It was a great experience,” said sophomore Cindy Bravo. “Our veteran was a woman and she was really kind: she gave us a lot of information.”