Foreign Exchange Students enjoy New York City and Washington D.C. near the end of their programs 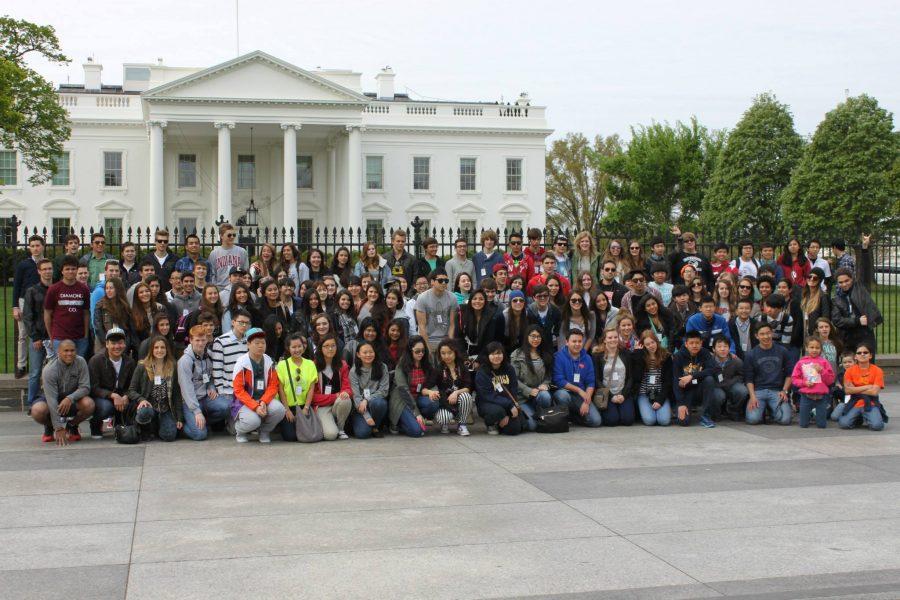 The school year is close to the end and so are the exchange students’ programs in the U.S. What could be a better way to start saying goodbye than traveling to the most famous cities of this country?
On April 28, more than 150 students from Michigan and Indiana, were able to leave their states and travel to a completely different environment.
Three buses full of students left their host homes that day early in the morning. Some students spent the first hours sleeping, but most of them couldn’t because of the excitement. There was a big variety of ISE (International Student Exchange) students from South Korea, Italy, Colombia, Spain, Belgium, China and more!
The students visited Washington D.C. on the following Monday. They saw the White House, U.S. Capitol, Lincoln Memorial, Jefferson Memorial, World War ll Memorial, Korean War Memorial, Franklin D. Roosevelt Memorial and Arlington Cemetery.
“I think Washington was a really interesting place to visit and to learn about the US government and history,” said Cristina Gallardo, exchange student from Spain.
“Washington D.C. is very different from most big cities in America. It felt like it had more of an European style, the architecture and just the structure of the city in general. I like that it is so green and clean. I could definitely imagine spending a year or two living there,” said Anna Lüning, exchange student from Sweden.
The students were able to take pictures of the capital city and learn new things about a many different countries. For example, Spanish and South American students were compared the different words that they use in their countries, despite the fact that they all speak Spanish.
On the next day, all the students got into their buses and headed to New York City. It was a five hour trip, but it was nothing compared to the twelve hours it took to arrive to Washington. The foreigners arrived to the city at 2:00 p.m. and had some free time which they used to see Central Park, St. Patrick’s Cathedral, and a lot of more interesting places on Fifth Avenue, despite the bad weather. After that, they had a really cheerful dinner at Ellen’s Stardust and were then able to spend little time in Times Square.
“NYC is one of my absolute favorite places in the entire world. There are so many people with so many different backgrounds from everywhere and the city grows upwards,” exchange student from Sweden Anna Lüning continued,  “I like that it is so concentrated. No one is like the other. Everyone is different and it feels like no one is really judging anyone. Everyone has their own goal and career,”
During the next few days they visited the Statue of Liberty, Chinatown, The Empire State Building, Broadway and Ground Zero while getting to know one another better.
“I really enjoyed this trip. I have already been in New York before but this time it was different because I was able to speak with people from a lot of countries and cultures!” said Fernando Sento-Sé, exchange student from Brazil.
It was on May 2, after a lot of amazing moments, when the students headed back to their states. It was really hard to say goodbye to each other, knowing that a lot of time would pass until they would meet again, if they even meet again.
“I think that this trip was a great experience that gave me the chance to see old friends again and to meet some amazing new ones. I absolutely loved NY, it’s different to everything I know and it is like a place of dreams,” Spanish exchange student Cristina Gallardo continued, “My favorite part of the trip was spending time with other exchange students in Times Square. We even have a pictured of us posted on one of the big screens of American Eagle store!”