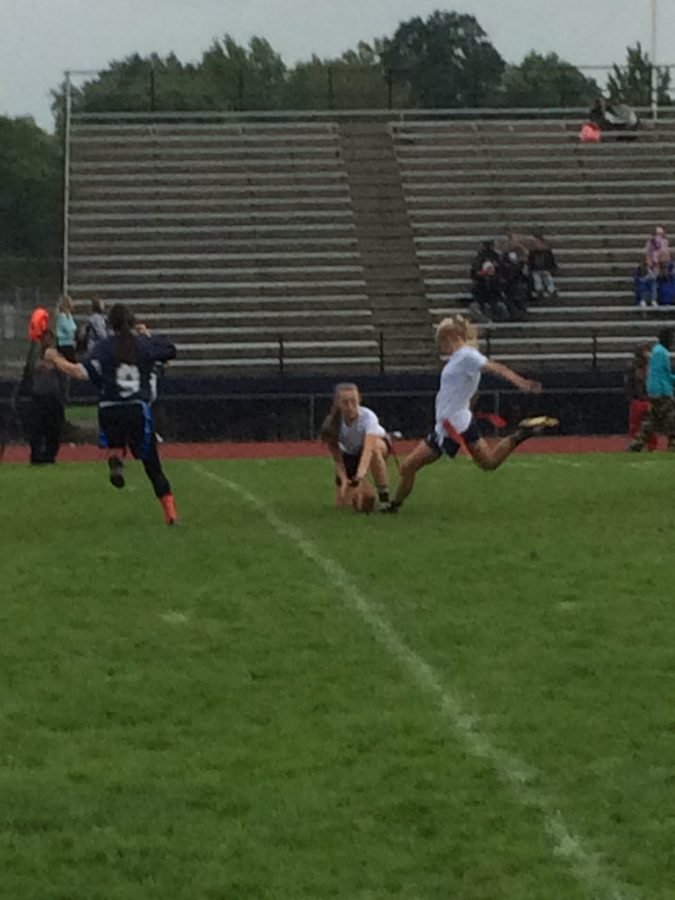 Junior Grace Labide kicks her second field goal of the game. Her first kick was an extra point, worth 2 points in Powderpuff.

“One team!” “One dream!”
The chant normally heard by the varsity football team before games was heard on both sides of the field this Monday. The Powderpuff Football game, where the senior and junior girls face off in a game of good ol’ fashioned flag football, was one for the books. The seniors started off with the ball, but couldn’t get it across the goal line on their first drive. Junior Julie Zabik ran into the end zone early on the first drive. The game was at a stalemate until senior quarterback Jordan Liddle threw a nice pass to Champagne Bennett, who then ran along the goal line for the first touchdown of the game.
“I was surprised! I was really nervous since we didn’t have a lot of practices,” said Liddle. Although the seniors were the first to get into the end zone, it would be their last time there for the rest of the game. The juniors came back with a vengeance, with Zabik scoring another touchdown and Grace Labide scoring five points worth of field goals.
“Not only did we have good players, we taught them enough in the day and a half of practice to where they knew the basic idea of football,” said junior coach Nick May about his team.
The seniors, despite their loss, stayed in good spirits.
“After we lost the game I was just really happy overall because we had a good time and didn’t take it too seriously,” said senior Lindy Moored
The final score, 17-6, leaves the Junior class with dreams of a 2-0 record for next year.
Delete Image
Align Left
Align Center
Align Right
Align Left
Align Center
Delete Heading