Hits from the Billboard Charts and the Evolution of Music 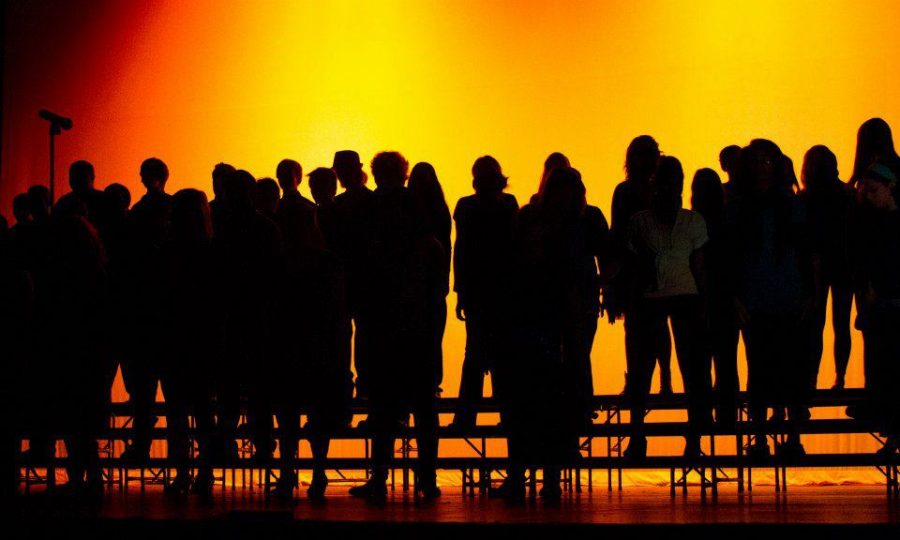 The Loy Norrix Choir performs on stage singing songs that have been on the billboard charts.

Julie Pelligrino, the second-year choir teacher at Loy Norrix is directing the Cabaret Concert. This show is the first choir concert of the 2014-2015 school year, and has a “Hits from the Billboard charts” theme.
The show features Billboard hits from the 1950s until now. The theme was originally going to be “Music through the Decades,” but it was changed to the current theme to focus on popular music. The familiarity of the music being performed in the cabaret will hopefully interest more people into attending.
In the 1950s, the music revolved mostly around Classical Pop, R&B, Rock and Roll, Country, and Blues. Artists like Frank Sinatra, Tony Bennett, Little Richard, James Brown, Fats Domino, Elvis Presley, Ray Charles, Hank Williams, and Ritchie Valens ruled the music scene.
Ritchie Valens, a Latin American Rock and Roll musician, was the first Latin artist to successfully make a crossover into mainstream Rock and Roll.
“I was inspired by Ritchie Valens when I saw the movie [La Bamba],” junior Luis Juarez.
Being inspired by Valens, Juarez and senior Brian Diaz decided to audition to sing “La Bamba,” Valens’ version of the song.
The 1960s, Rock music’s best year, was filled with Folk Music, different types of Rock, Pop, R&B, and Country. Motown was also really big in the 60s. Some chart-topping artists from the 1960s included Bob Dylan, Simon and Garfunkel, Janis Joplin, Led Zeppelin, The Beatles, The Beach Boys, Marvin Gaye, Jackson Five, and Johnny Cash.
“Stand By Me,” a song by singer, Ben E. King was released in 1961 and hit number 4 on Billboard’s Hot 100 list. In 1986, the song returned to the Hot 100s list when the movie of the same name was released in August of the same year.
Junior Sidney Ellis decided to join the small group of Mixed Chorus students in singing this song because “Ben E. King is great,” and because with the bass line everyone knows and loves, “It’s a good song for the basses,” Ellis added.
In the 1970s, Disco, Rock, Pop, R&B, and Country were big, with artists like Donna Summer, The Bee Gees, Black Sabbath, Kiss, AC/DC, Journey, Eric Clapton, James Brown, Earth, Wind, and Fire, The Commodores, Jackson Five, Olivia Newton-John, Kenny Rogers, and Willie Nelson.
With the 1980s came some of the most influential artists of all time such as Michael Jackson and Madonna. Other big artists in the 1980s included Rick Astley, Whitney Houston, Bon Jovi, Paula Abdul, Cher, U2, Queen, Bruce Springsteen, Stevie Wonder, and the popularization of Hip Hop, with artists like Run D.M.C., Public Enemy, and NWA.
The 1990s were big on Alternative Rock with bands like Nirvana, REM, Rage Against The Machine, and Pearl Jam, but other genres of music with chart-topping artists include Pop, with Michael Jackson and Britney Spears, R&B with Whitney Houston and Mariah Carey, and Hip Hop with many artists such as MC Hammer, 2pac, Notorious B.I.G., Jay-Z, Dr. Dre, and Boyz II Men.
The 2000s were big on mainstream Hip Hop acts like Eminem, Outkast, 50 Cent, Kanye West, Jay Z, Snoop Dogg, and Nas, but there was also mainstream success in Pop, Rock, R&B, and Electronic music. Some of the successful artists of the 00s were Chris Brown, Justin Timberlake, Janet Jackson, Beyonce, Britney Spears, Rihanna, Carrie Underwood, and Taylor Swift.
Though we are only 4 years into the new decade, Electropop has been one of the biggest influences on music thus far. Some of the biggest Electropop artists of the early 10s are Lady Gaga, Rihanna, Nicki Minaj, Chris Brown, Usher, and Ne-Yo.
The other major genres of the 2010s this far are Hip Hop, Indie Rock, and Electronic Music. Some of the most successful artists of those genres are Drake, Nicki Minaj, Kendrick Lamar, 2 Chainz, Wiz Khalifa, Beyonce, Fun, Lana Del Rey, Lorde, Of Monsters and Men, Neon Trees, Ellie Goulding, Maroon 5, Jennifer Lopez, Disclosure, Sam Smith, and David Guetta.
The progression of Pop music since the 1950s may have been a natural progression with advancements in technology, but as we’ve seen through the decades, there has been the same overlying genres controlling Billboards Hot 100, but the differences are the variations of that genre.
Different events also helped to shape the underlying genres of the 1960s. With the Vietnam War, came compelling music from John Lennon and Marvin Gaye. With the psychedelic revolution, came psychedelic music by Jefferson Airplane, Janis Joplin, Santana, and Jimi Hendrix. With 1960s counterculture, came the rebellious music of The Rolling Stones, Jim Morrison, and Led Zeppelin. With the civil liberties of African Americans being absent, came music from the likes of Aretha Franklin, Bob Dylan, Mahalia Jackson, and Sam Cooke.
Seniors Joriah Fleming and Valeria Montero are singing “A Change is Gonna Come,” a song about the struggles [of African Americans] in the 1960s,” said Fleming.

“A song paying homage to those who fought for where we [African Americans] are now,” Fleming added.

Mixed Chorus, Advanced Mixed Chorus, and Master Singers are performing in the show. Auditions were open to soloists and small groups, but have since been closed. Pelligrino added with an enthused tone, that “There will be a lot of talent.”

The Cabaret Concert will be at Loy Norrix Kasdorf Auditorium on Friday, November 14th and Saturday, November 15th, 2014. Admission to the show will cost $10 for adults and $5 for students with IDs.