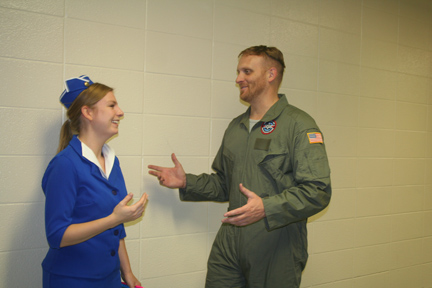 Boo! Did I scare you? I thought so. Speaking of scaring people, Halloween happens to be this month. You probably already knew this, but one thing you might not know is the origin of Halloween. Considering the large amount of people that celebrate this holiday, not many people know where it comes from.
To star with, the word “Halloween” means all hallows evening. The word hallow means honor or holy. In simpler terms Halloween simply stands for all holy evening. This makes Halloween seem religious, which is true.
Halloween originally comes from ancient Gaelic Celtic festival in Ireland. This festival is known as Samhain [Sah-Win]. Samhain celebrates the ending of the harvest season and the end of the Northwestern Europe’s summer. Since it was the last day of summer, superstition played a role as it was a big change heading into winter. This was also the time for the Gael’s to stock kitchen shelves and prepare for winter.
The Gaels also believed that on the 31st of October the underworld of the deceased would overlap with the world we live in today. This created a very religious day, which is where “all holy evening” comes from. The spirits would come down to Ireland and spread sickness and ruin crops. Gaels would wear masks to blend in with the demons furthermore protecting themselves from sickness and bad crops.
Trick or treating has been a very common practice since the Middle Ages. If you didn’t give treats in the Middle Ages you would really get tricked, as the puerile trick or treaters would vandalize your house and physically hurt you. Trick or treating originally comes from souling. Souling is a practice which took place on November 1st or all hallows day when poor people would go door to door asking for food, and in return pray for the dead on November 2nd (all souls day). This tradition originated in Ireland and Britain. There is no of evidence of souling in America, but trick or treating is more alive then ever.
While out at night during Halloween, the Gaels would need a way to see in the dark. Turnips (the vegetable, not “turn up”) were used to put candles in and carried around. This is where the now popular pumpkin jack-o’-lanterns come from. As you go out on Halloween night, think about this article and why you’re actually dressing up and where it comes from. Spread this story; tell your family, friends and even the ghouls.
Delete Image
Align Left
Align Center
Align Right
Align Left
Align Center
Delete Heading