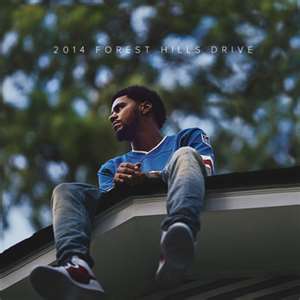 Released just before the end of 2014, probably to increase the effect of the title, “2014 Forest Hills Drive” is J-Cole’s third album under the Roc-Nation label. USA Today’s review of the album said that “Cole dreams bigger than most major-label rappers, but he has yet to realize that vision in LP format,” but I strongly disagree. Cole’s album covers a large spectrum of topics and moods, with songs like “January 28” starting the album off strong with a reflection on his career transitioning to “A Tale of Two Citiez” which has more of a Wu-Tang feel to it.
The unique thing about this album is that it features no guest artists on any songs, which puts a lot of pressure on Cole to carry the album on his own. He even handles a few of the choruses on his own, on tracks like “Hello” and  “Apparently,” which has lots of overlapping vocals and long instrumentals. The track “Fire Squad” even addresses some pretty controversial topics regarding the music industry and the corruption within.
Cole also didn’t release any singles from the album, releasing this quote from his instagram account“I want you to hear the album straight through, front to back.” This along with his lack of featured artists gave Cole some heat from big time music critics, but really opened up a lot for him personally.
The thing that makes it stand out from other rap/hip-hop is his emphasis on himself. His last track, “Note to Self” is a 14 minute ‘thank you’ normally featured on the inside pamphlet in the physical CD case. In this he states more than once that he doesn’t care how much the album sells, just that he loved making it and loved doing it. Whenever one thinks of an artist, you think of people who use their creativity to express themselves. J-Cole strikes me as the kind of person who would produce and record an album on his own because he wanted to do it his way, and I can’t think of a better way to make the music industry take a step back and think about the way they conduct business
As with all art, the album speaks to some listeners and is misunderstood by others. However, Forest Hills Drive has been talking to me for weeks and I have been listening.
Delete Image
Align Left
Align Center
Align Right
Align Left
Align Center
Delete Heading