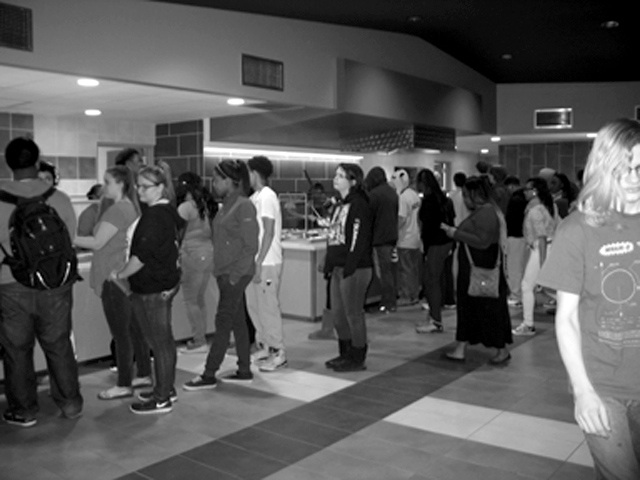 Article by: Evelyn Banks
A lot has changed at Loy Norrix High School the past few years, physically and societally. While the “Glass Palace” looks and feels the same from the outside, there have been many alterations and modifications on the inside, such as upgraded steps, a cleaner entrance, a new and improved cafeteria and revised rules and policies.
“The tower steps used to be disintegrating and dangerous, but now they are improved,” said team teacher Jennifer Ko.
“The tower looks better than it used to. It seems neater and cleaned up, it’s beautiful,” said senior Jasmine Butler.
Whether you are a staff member or a student, everyone has witnessed some positive and negative changes during their time at Loy Norrix.
“Another thing that has changed at Norrix is that people are more polite to one another. Students open and hold doors for each other and the level of nastiness has gone down,” Ko said. Ko also said she remembers a time the use of technology was not allowed.
“There used to be a rule that no technology was allowed to be used in class at all, by students or teachers,” said Ko.
Now technology is everywhere and teachers allow students to use their cell phones for their class work, to listen to music and even check their grades on eSchool.
“I use eSchool to check my grades, attendance and my classes for the next trimester. I check my grades at least once a week,” said Butler. Whether major or minor, Loy Norrix seniors often feel things are different from their freshman year.
“Since freshman year it seems like a lot has changed. The dress code is different and the teachers seem stricter [as far as work],” said senior Ja’la Tolin.
The dress code policy at Loy Norrix used to be enforced upon every student. For example, there was once a rule that girls could not wear leggings and boys could not wear muscle shirts or tank tops. The dress code policy hasn’t changed much, but staff is more lenient, and less consistent.
“The dress code is the same, but as trends change students push the dress code,” said Assistant Principal Kelly Hinga.
“Back in the day, ripped jeans weren’t in style, but now we see it more and the rips [in student’s jeans] are getting higher and higher. It used to be ruled that skirts and shorts could not be shorter than your arm’s length. Now it was changed to two inches above the knee, but people still think that the rule is for skirts and shorts to be arm’s length,” said Hinga. “I would change the consistency on enforcing the dress code and making it less vague.”
Rules and appearances are not the only things that have changed over the years. Students are also doing better as far as academics.
“I see more students taking AP classes and more students going to college after they graduate,” said campus safety officer Frank Williams.
According to MLive, the number of students in Kalamazoo Public Schools taking AP courses has increased by 147 percent. Students are now working harder to improve their grades and get into good colleges.
Even though many rules and ways of teaching have changed, there are still many positive factors about Loy Norrix and the fact that Loy Norrix is a safe place for learning-remains the same. Teachers and staff always work hard to make sure students are safe and get the knowledge and education they need to be successful.
Delete Image
Align Left
Align Center
Align Right
Align Left
Align Center
Delete Heading