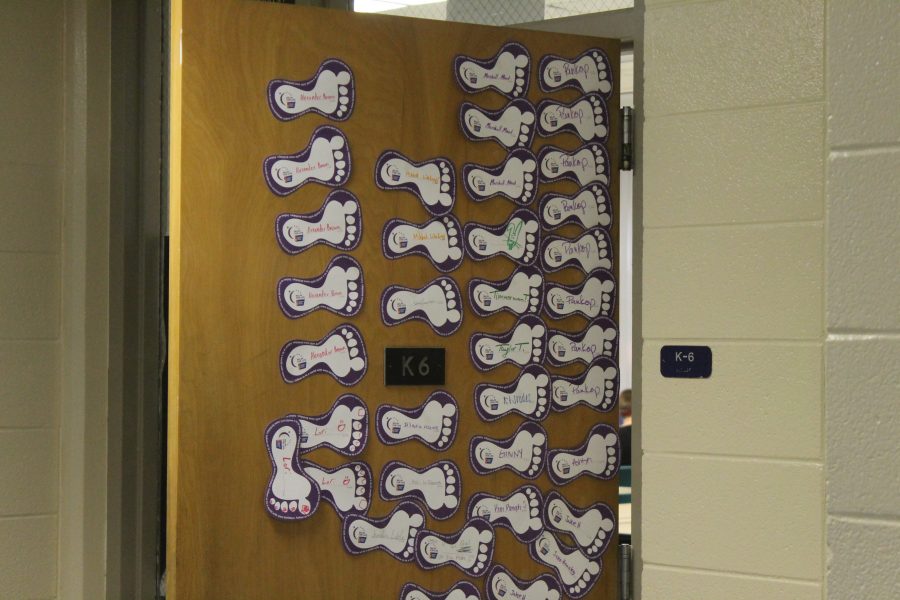 The door to Ms. Pankop's room is covered in feet, representing each of the students from her class who have donated to Relay for Life.

This might not be exactly the type of question one would expect to hear from their high school homeroom teacher, but it’s one students will likely be hearing much more over the next several weeks.

For the next week until May 29th, the Loy Norrix community will be raising money for Relay for Life, an organization set up to raise money for cancer research. One way students can contribute is by donating a dollar, and writing their name on one of the foot shaped donor sheets, which will be posted outside their teacher’s classroom. First hour classes will be competing in a friendly competition to see who can raise the most money. The winning class will receive a breakfast.

On Saturday, May 30th participants will gather at McCamley field for a 24 hour event. Activities will range from running laps around the track to participating in the luminary memorial.

Loy Norrix is no stranger when it comes to supporting charities. For the last decade, students have participated in Livestrong’s Coins for Cancer event, organized by Ms. May and her PeaceJammers. However, now a new project has burst onto the scene.

This is only Loy Norrix’s second year participating in Relay for Life. It was Assistant Principal Kelly Hinga’s idea to start a team at Loy Norrix, but she isn’t the only one with a passion for the project. There are six teacher coordinators and a team of about seven student leaders. “Being a part of Relay for Life was important to me because cancer has always been a major thing in my family,” said Hinga. “My sister is a leukemia doctor, and it has affected me personally with some things I’ve gone through, so Relay for Life was always something I knew I wanted to be involved in.”

The project has been well received at Loy Norrix so far. About half of the staff have already purchased the Norrix Nixing Cancer t-shirts, and students of all grade levels have been helping to prepare for the big event. “I was actually surprised by how many students are getting involved in it,” said teacher Samantha Maxwell.

“Relay for Life is such an exciting event,” said senior Tiara Blair. “I love coming out to support it. It’s very inspiring to meet and watch all the cancer survivors at the event. If you can make it, you should come join us.”

If you’re interested in donating or being a part of the Loy Norrix Relay for Life team, talk to Ms. Hinga or Mrs. May, or sign up at http://main.ascevents.org/goto/norrixnixingcancer.