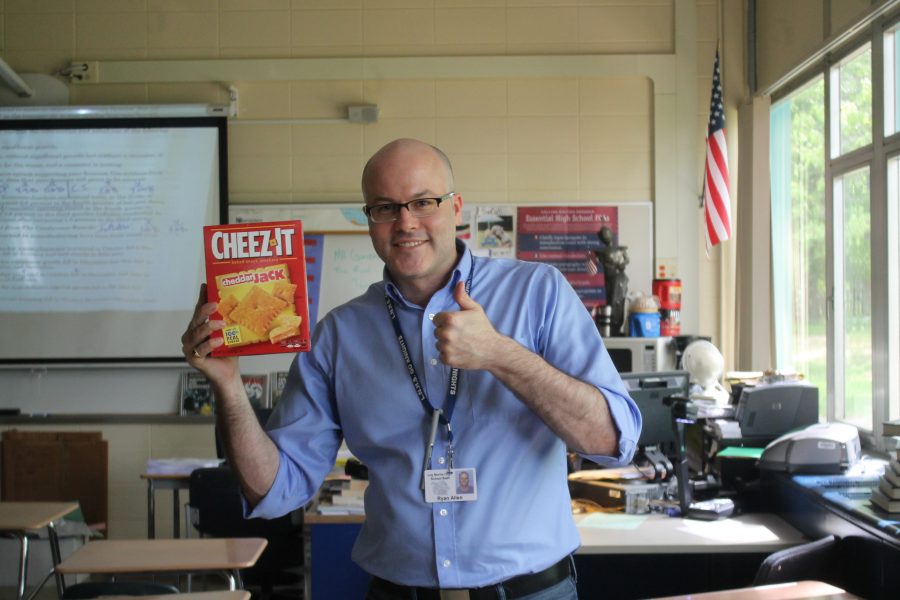 Even after a traumatic experience, Mr. Allen still promotes Cheez-Its.

Everyone remembers those awkward, embarrassing moments where you just make a fool of yourself. Believe it or not, teachers experience them as well. As a young substitute teacher, Mr. Allen was deciding whether to teach elementary or secondary education. His first, and last, experience with teaching elementary students was definitely an interesting one.  “I’m here for a reason,” states Allen, “because I don’t deal with little kids very well.” After hearing this story, it’s easy to see why.

Imagine this: a young Mr. Allen subbing for a bright-eyed kindergarten class when snack time comes around. There is one big box of Cheez-Its for the entire class to share. Table by table, he hands out “very liberal amounts of Cheez-its” to the students, until he gets to the last table. Allen realizes that only a small portion of crackers are left, and he is forced to cut down his rations. “It got to the point where at the very end, I literally gave a kid five Cheez-its,” states Allen.  He didn’t think that it would be a big deal because he “really did not think that kindergarteners could count.”

Next thing he knew, a “little kid chair” came flying by his head. This young, four-foot-tall student was livid. Allen didn’t know what to do. His first reaction was to subdue the child by picking him up. That didn’t go over well for the kindergartener. After the struggle of pushing chairs and tables aside, Mr. Allen finally had picked up “this little Rambo kid” to take him to the principal’s office.

Thinking that acquiring the child was the hardest part, Allen was soon proved wrong. “You know the analogy of when you try to put a cat in water, and it spreads its legs out and braces against the top? The kindergartener did that against the classroom doorway, and fell backwards. “I almost fell backwards myself,” stated Allen. After many attempts, they finally made it out the doorway. Standing right outside, the principal of the school didn’t even say a word; she just shook her head and waved her finger. She didn’t even take the student.

“I turned right back around, I went right back into the room, and I got the day done,” stated Allen. “I put back all of the little kid desks and chairs, popped in a movie, and that’s how I finished the day.” The most eventful snack time ever led Mr. Allen to never substitute teach, or even think of teaching elementary school, ever again.