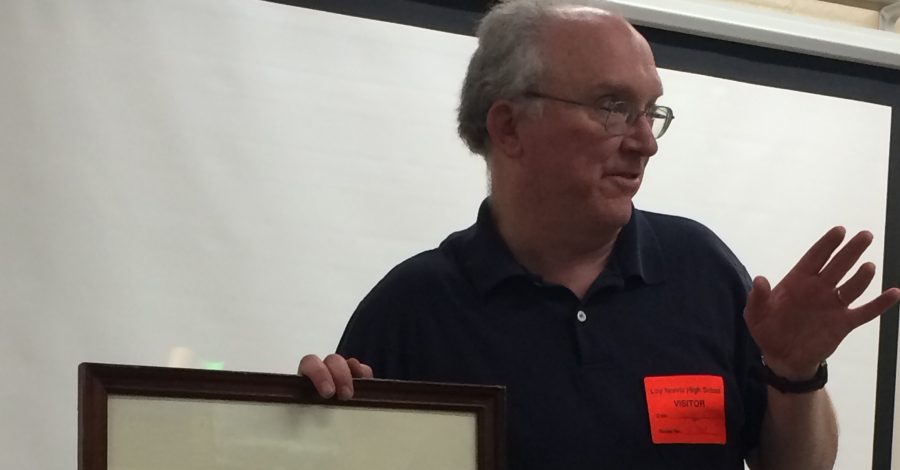 On May 21st, Professor Steven Cartwright visited the Loy Norrix Latin class. Cartwright, who teaches history at Western Michigan University, showed ancient texts written during the 13th century. These manuscripts, handwritten by scribes, are in Latin, a language that while no longer today, was incredibly common one-thousand years ago.
According to Cartwright, these texts, written on animal hides, were transcribed by scribes over and over, in order to make copies. Writing during the medieval period was much harder than it is today. While it seems like we have an almost infinite supply of paper, it could take an entire herd of animals to write just one book during medieval times. These animal skins needed to be tanned before they were usable, making this “paper” a valuable commodity.
In order to conserve space, the scribes used abbreviations for many of the common  latin words. For example, est, the latin verb for “it is,” is shortened down to a semi-colon. In fact, a book has been written just to translate each abbreviation found in the texts.
The text is also quite small. Sometimes, entire words are blended with others and it is very hard to distinguish between certain letters.
“I was surprised at how difficult the texts were to read, partly because of how many unfamiliar abbreviations there were, but also because of the handwriting,” said junior Lily Krone.
Part of professor Cartwright’s job is to translate these texts into English, a job that can be difficult or easy depending on the author’s handwriting.
“Translating can be difficult because each author has a different handwriting,” Cartwright said.
On the paper that the second hour latin class translated, the scribe who wrote it made his s’s look like r’s, making the translation a much more arduous task.
Transcribers can also make mistakes when copying a manuscript. When reading multiple copies of the same text, it becomes painfully obvious that some scribes make errors when copying down the words.
“I was very grateful that the Loy Norrix Latin students had a chance, not only to see a priceless manuscript but also to learn that historians today still have to be experts in Latin to do their work. So Latin isn’t really a dead language,” Latin teacher Barbara Felkel said.
Delete Image
Align Left
Align Center
Align Right
Align Left
Align Center
Delete Heading