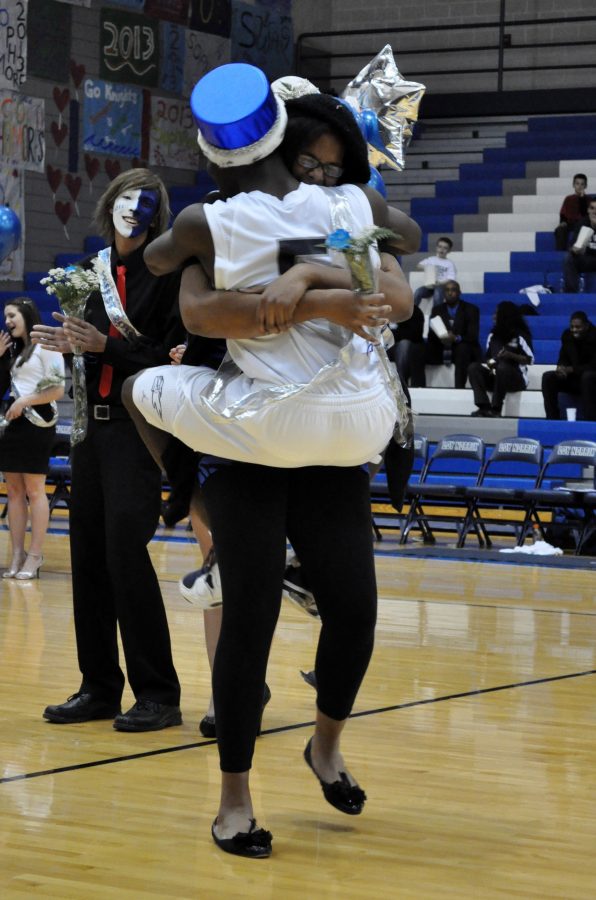 Senior Ava Gaines and Je'Vonte' Hughes crowned Winterfest king and queen. They were both nominated by their peers and were crowed durning the half time of the Loy Norrix mens basketball game.

The week of February 14 marked Winterfest here at Loy Norrix High School. Celebration of Winterfest included a pep rally, a week filled with spirit, a men’s and women’s basketball game, and to top it all off, the week ended with the Winterfest dance.

The week of school spirit included the usual festivities, which mainly consisted of dressing up, with each day having a unique theme. Monday was red and pink day in celebration of Valentine’s Day, Tuesday was fictional character day, Wednesday was fashion disaster day, Thursday was whiteout day, and Friday was spirit day.

Spirit days gave many students a chance to dress up and express their own individual and unique style. Freshman Joe Santamaria took advantage of fictional character day and dressed as the Green Lantern, a superhero that originated from DC comics.

The pep rally took place on Thursday the 17th with many fun activities that helped classes earn points towards the spirit jug. Some of the activities included musical chairs and a sing-off of the fight song between all four classes. The seniors won the jug for Winterfest this year, which is a prize awarded to the class with the most participation points throughout the week.

On the 18th, the men’s basketball team took the court for the Winterfest basketball game against Battle Creek Central. Seniors Shaquille Love, Daequan Mitchell, and Je’Vonte’ Hughes all put up 16 points each for the Knights. The team had a tough game and fought their hardest and took home a 2-point victory in the end to win the Winterfest game. The overall score was 72 to 70.

During halftime, the Winterfest court was introduced and crowned. This year’s Winterfest king and queen both shared something in common, they both play basketball for Loy Norrix. The king is star basketball player, Je’Vonte’ Hughes, and this year’s queen was Ava Gaines.

Both Ava and Je’Vonte’ were excited about being crowned king and queen of Winterfest.

“I wasn’t expecting him to jump on me, we were both excited, and we didn’t expect to win,” said Gaines.

The last of the festivities for Winterfest was the dance. Following the game, many students attended the dance just like many of the other school dances.

Among those who attended were senior Humza Chaudry who said, “It was a pretty fun dance, but it ended way too early.”