Risks of Football: The Growing Problem Posed by Concussions 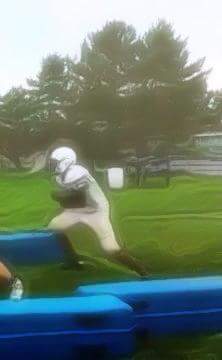 Sophomore Bernard Foster participating in a running drill during a Loy Norrix football practice. While recovering from a concussion is hard, Foster is used to dodging tackles and avoiding those who wish to take him down.

Silence, sweaty and tired. The players stare each other in the eyes under the bright stadium lights. The second half looks to be just as competitive as the first. Swoosh. The ball goes flying into the air and the kicking team runs down to meet the receiving team, hopefully with a hard hit. But as sophomore special teams player and cornerback for the Loy Norrix Knights Bernard Foster sprinted down the field, he experienced a costly role reversal. Foster, blind sided by an opposing player, landed on the unforgiving turf hard, head first, and received a concussion.

The reality of a concussion is one felt by countless football players across all ages. The Mayo Clinic in Rochester, Minnesota defines a concussion as a traumatic brain injury that results in a change in brain functioning. The brain is cushioned from everyday activity by the cerebrospinal fluid inside the skull. Violent blows to the upper neck or head can cause the brain to forcefully bounce back and forth against the inner layer of the skull. The common symptoms of this type of brain injury include headaches, amnesia and confusion.

All athletes are at higher risk for concussions, but research has shown that football players have the highest possibility of receiving a concussion. According to Headcase, high school football accounts for 47 percent of all sports related concussions. The effects of such an injury can be devastating.

“[It] felt like I didn’t have my legs under me,” Foster said, “My senses were messed up, I felt weak.”

Foster was in for a long road to recovery from his concussion. He was hospitalized the day after, and he attended three more doctor’s appointments. Foster’s rehabilitation process took a total of five weeks, but each day he was itching to get back to the football field. When Foster’s mom told him that she did not want him to play football again after receiving his second concussion, he fought back.

“I got to play, I got to finish the season,” said Foster.

This reaction, the desire to return to play, is one found among many football players, but it can also be highly detrimental to their health. A recent barrage of lawsuits regarding brain injuries prompted the National Football League’s (NFL) latest concussion policy and campaign, based around the Lystedt Laws. These laws mandate proper education regarding concussions, removal from games when a concussion is suspected, and professional medical clearance before returning to games. The NFL’s campaign is generally considered a success, as now a version of these Lystedt Laws is now present in all 50 states. However, the back story of the Lystedt Laws is far less happy.

The Laws are based on the story of a thirteen year old football player named Zachary Lystedt from the state of Washington. While playing in a game, Zachary received a concussion, but instead of being removed from the game and receiving proper treatment, he went back in within 15 minutes. He eventually collapsed on the field, and was airlifted to a hospital where he spent the next three months in a coma. It took three years before Zachary was able to walk again, and the first Lystedt law was passed as he looked on from a wheelchair.

While the Lystedt case shows the devastating effects of returning to the game too early, for some players the benefits outweigh the risks. The desire to return to play is evident; it was present for both Zachary and Foster. It also stretches to the professional level, where leaving a game for just 20 minutes can cost thousands of dollars. This eagerness to come back is shown by Foster’s idol in the NFL, All-Pro Seattle Seahawks cornerback Richard Sherman. Sherman wrote in a guest column for the “Monday Morning Quarterback” that he received a concussion during Game 7 of the 2011 NFL season against the Cincinnati Bengals. Instead of coming off the field and receiving proper medical treatment, Sherman stayed in the game, and his gamble paid off when he recorded his first career interception.

“The concussion blurred my vision, and I played the next two quarters half-blind,” said Sherman, “but there was no way I was coming off the field with so much at stake.” (NBC Sports)

While the risks of reentering a game too early after receiving a concussion are clearly shown by the story of Zachary Lystedt, many NFL players possess the same mindset as Sherman. They argue that every NFL player chose this profession, and as such they should have the right to individually assess the risks of a concussion and playing through it. However, this opinion is not shared by all NFL players, as shown by the recent retirement of San Francisco 49er’s linebacker Chris Borland. Opposite of Sherman, Borland found that the risks outweighed the benefits of an NFL career and decided to call it quits after a single season.

“I just honestly want to do what’s best for my health,” Borland said, “From what I’ve researched and what I’ve experienced, I don’t think it’s worth the risk.” (NBC Sports)

The National Football League has clearly reached a crossroads over the issue of concussions. The viewpoints of players vary as some, like Sherman, find the benefits to outweigh the risk and are willing to risk their health to play through a concussion, while others, like Borland, find the risks substantial enough to cut short their career. This issue is not, however, limited to the professionals. As shown through the stories of Lystedt and Foster, concussions are a serious issue at all ages, and the division over to handle them is costing the sport of football dearly.

According to NBC News, High school football participation has dropped by 2 percent since 2008, and the number of Pop Warner players has decreased by 10 percent since 2010. Some even say the sport could be headed for extinction as early as 2030, due to the significant expenses incurred by concussions.

The NFL has recently reached a settlement with around 45 hundred former players who filed suits for concussion-related injuries received while playing. According to NFL Concussion Settlement, monetary awards are available for different qualifying diagnoses received due to brain trauma caused while playing in the league. The maximum available payment for Amyotrophic Lateral Sclerosis (ALS) is $5 million, $4 million for Death with Chronic Traumatic Encephalopathy (CTE), and $3.5 million for both Parkinson’s disease and Alzheimer’s disease. While these are only maximums and not each player will receive this amount of money, this settlement will clearly be costly for the NFL, validating claims that these serious expenses could be football’s undoing.

While the NFL may be losing money fast, and the entire sport fading into oblivion, Foster is not leaving. Despite his two concussions he plans to play again next year, where he looks to make varsity as a cornerback. The risks may be apparent, but so is his love for the game, meaning quitting is not an option.