Milwood Elementary is Torn Down for Remodeling 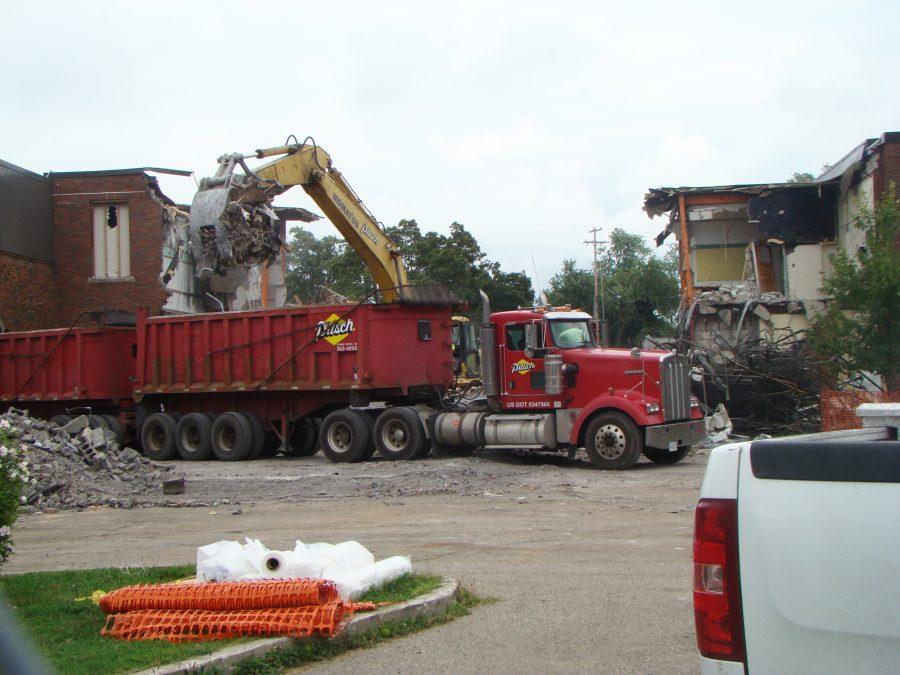 Milwood Elementary, a school that has stood for almost 100 years, is demolished for remodeling. A crane lifts up rubble from the demolition. Photo Credit / Caitlin Commissaris

Wrecking balls and bulldozers are now tearing down a place that children used to learn, laugh, and play. The halls that students used to roam with peers are no longer standing.
Former Milwood Alumni couldn’t bear to watch the school that helped shape them as a person be ripped apart. Outside the gates of construction a man with silver hair stood watching the destruction with tears in his eyes, most likely recalling the memories of old friendships and times when things were simpler.
“Seeing my old school being torn down feels like my memories from there are being torn down too. I remember playing with friends on the playground and basketball court and now that’s all gone,” said Jake, Milwood alumni.
Milwood Elementary is a school that has stood in Kalamazoo for nearly 100 years. According to mlive, the school’s north wing, which was constructed in the 1920s, is being torn down and rebuilt along with the playground and basketball court. This project is estimated to cost 5.5 million dollars.
“I remember running through the halls with my friends and racing each other to class. We had a blast there. I’ll never forget it even when those halls that we ran through are in crumbles,” said Trevor Morgan, a former student.
Students who attended Milwood Elementary are now being bused to the former Kalamazoo Christian Middle School. The building was purchased by KPS in 2013. These students were also given the option to attend Greenwood Elementary for the year.
“My favorite part of that school was the huge wall with the jungle mural painted on it because I thought it was really cool and would look at it a lot as a kid, its sad because that wall was torn down,” said Morgan Kenbeek, a former Milwood student.
By the fall of 2016 Milwood’s doors will reopen and the school will look better than ever. The memories made there will never be forgotten and many new memories will be made in the years to follow.
Delete Image
Align Left
Align Center
Align Right
Align Left
Align Center
Delete Heading