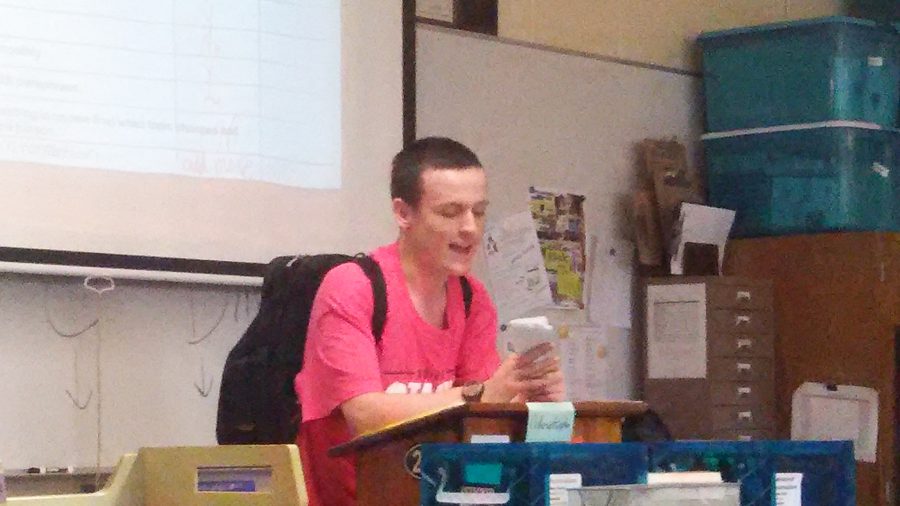 Brandon Whitmore is a 15 year old sophomore who loves people. He was granted the the opportunity to come into Tisha Pankop’s 5th hour Journalism class to give a presentation on his life. All he had asked was for the class to stay off their phones and grant him their full attention.
Whitmore came into the classroom excited and ready to speak to the class. Brandon, AKA B-Dog, pulled out his sheet of paper and began. The entire class did as promised and were quiet during B-Dog’s presentation. The class was respectful and didn’t speak a word.
Whitmore started talking about facts such as his favorite food being pizza and his favorite college football teams, Michigan State and University of Michigan.
“Eighteen is my favorite number because I turn 18 in 2018, and it’s when I graduate,” said Whitmore.
After Whitmore finished, he allowed people to ask questions. Most of them were simple such as what his favorite toppings are for pizza, but then someone had asked the question that everybody wondered. Why does he always come to Pankop’s 5th hour Journalism class?
“I always come to Mrs. Pankop’s class because it’s fun,” said Whitmore.
That was very nice for Pankop to hear.
“It felt great, but he still didn’t go on record that I was his favorite teacher,” said Pankop, “However, two days later, I finally achieved that title.”
After that, he had passed out lollipops and thanked the class for listening. That was a nice treat that everybody enjoyed.
Delete Image
Align Left
Align Center
Align Right
Align Left
Align Center
Delete Heading