Kalamazoo Remembers to Keep Its Promise 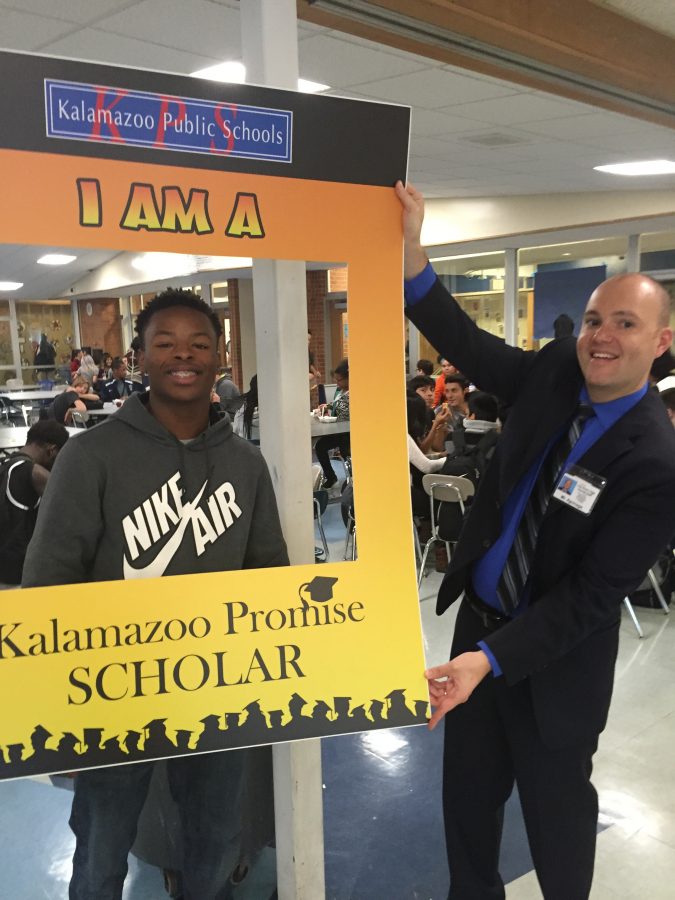 Aaron Holmes celebrates Promise Day, while Mr. Aguinaga holds the frame in front of him.

Featured Image: Photo Credit / Kelly Hinga
The Kalamazoo Promise has been around for 10 years, and coincidentally, on November 10th, Loy Norrix participated in Promise Day.
Promise Day is a day dedicated to reminding kids how lucky they are to be granted with the Kalamazoo Promise.
At every lunch, Assistant Principal Kelly Hinga, Dean of Students Christopher Aguinaga, and Athletic Director Andrew Laboe stood outside the cafeteria with a big cardboard cut out frame that said “I am a Kalamazoo Promise Scholar” around the sides. They caught as many passersby as they could and took “selfies” with students inside the frame, reminding them of the opportunity that the promise is giving them.
“It’s increased enrollment,” said Dean of Students Aguinaga about the Kalamazoo Promise, “[The Kalamazoo Promise] is not just working kids toward graduation, but working towards kids going to college.”
During fourth block, students read an article about the Promise that stated statistics about college and argued that even though it’s expensive, it’s worth it to get a degree. Students then wrote a John Collins Type 1 in response to it.
When asked what she would say to a Promise donor, senior Ruby Hensley said, “Thanks for giving me this opportunity that I never thought I would have.”
“[The Kalamazoo Promise] is unreal honestly because so many people are in student debt and we won’t have to worry about it,” said junior Lizzie Ko.
The Kalamazoo Promise is a phenomenal opportunity for kids to go to college; it’s an opportunity that comes around once in a lifetime. Promise Day reminds students to take advantage of the Promise and to take the opportunity of free college seriously.