Prepping For A Homecoming Pep Rally 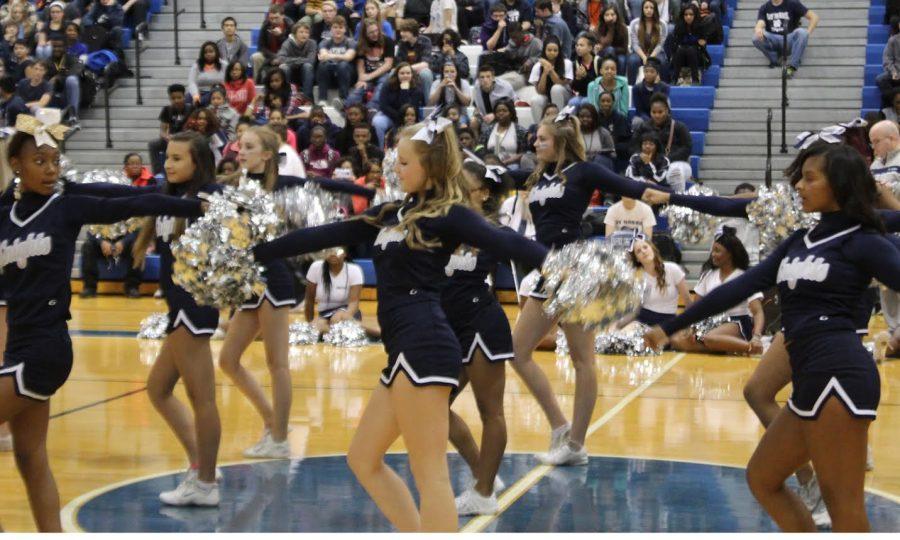 Imagine walking out into the middle of the gym floor, the whole school has their eyes on you as you make your way to your spot. You find your position and look up to see students’ eyes on you and your team in anticipation of what they are about to see. The gym is filled with hundreds of people and begins to fall silent as you stand waiting for your music to start.
Every year, the Loy Norrix cheerleaders prepare a routine to perform at the Homecoming Pep Rally. Hard work is put into every performance and require many hours of preparation.
Some high school cheer teams perform a routine or cheer every week during the sideline season.
Other schools in Loy Norrix’s football conference have dance teams at their school. The dance team performs at every home game during halftime. Battle Creek Lakeview High School and Lakeshore High School both have dance teams that have performed a halftime routine at a football game.
At Loy Norrix, the cheer team performs a routine during the homecoming pep assembly and the Winterfest pep assembly.
Not only do the cheerleaders work hard to learn and perform the routine, but the cheer coaches also work hard. The coaches choreograph and teach the routine which is not always easy.
“The routines are made up of what’s hot or out now,” said freshman Ariel Davenport, who is on the junior varsity cheer team.
The cheerleaders begin to learn the routine that their coaches compose a couple of weeks in advance of the pep rally performance. Lots of changes are made along the way due to loss of time and the varsity and junior varsity teams practicing separately. Despite this, the product is always something the cheerleaders are proud of.
Nerves are bound to kick in when performing in front of a whole school. Some cheerleaders have gotten used to all eyes on them, but some haven’t.
“It was really scary my first year, but I’ve gotten use to it. It’s still a little nerve wrecking,” said junior Maeve Wilson, “It’s dancing in front of 1500 people.”
Nerves also kick in about messing up or forgetting the routine. Nobody wants to be standing in the middle of the gym floor frozen because their mind went blank about what step comes next.
Cheering at a pep rally is very different from cheering at a football game. Students and families come to watch the football game and pay attention to the game, not the cheerleaders. At a pep rally, cheerleaders are the ones to watch, and all eyes are on them.
The pep rally gives the cheerleaders a chance to show the school what the team can do and is capable of.
“We can all show our peers what we have been practicing,” said freshman Mary Seals.
Cheering at a pep rally is where the cheerleaders showcase what they know and what they have learned throughout the season.
“It’s kind of the reputation of the cheerleaders for the people that don’t go to any games,” said Wilson.
The pep rally isn’t the only fun part about being on the cheer team. The cheerleaders attend every game to cheer on the football players. Parents even volunteer their time to transport the girls to the away games. The cheer team is a dedicated team having to cheer in the sunshine, the cold, and even the rain just like the football players.
The cheerleaders work very hard every year to perform a routine that can get the student body excited for the homecoming parade and game and enjoy participating in homecoming every year.
Delete Image
Align Left
Align Center
Align Right
Align Left
Align Center
Delete Heading