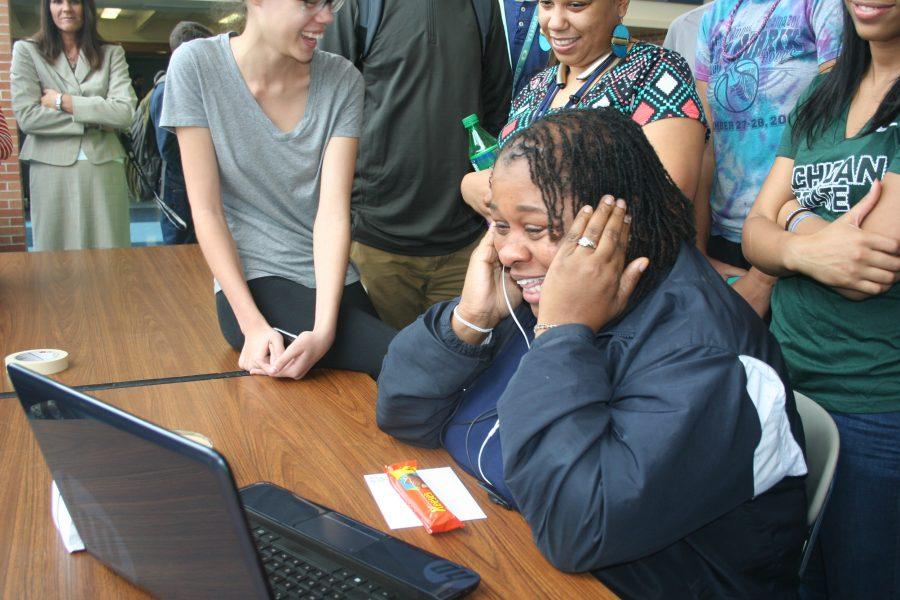 Hampton is in tears watching the video of several students saying what they love about her. Along with the video, she was given several other gifts from students. Photo Credit / Audra Penny

Over the past few years, the public has heard primarily about negative incidents that happen at Loy Norrix High School. The media rarely talks about how the high school has exceptional students, esteemed music programs, hardworking athletes, and a well-known forensics team.
Most of the time, what they hear instead is the school entering lock down, the immature fights or the appearance of six to eight police cars at the school. However, Link Crew is trying to eliminate that bad publicity by helping shape future high school graduates into good students and creating a positive environment at the high school.
Loy Norrix established the boomerang project’s “Link Crew” in the 2013-2014 school year. The program’s aim is to help ninth graders adapt to the high school environment by assigning them two upperclassmen. These upperclassmen, called Link Leaders, help look out for their freshmen over the whole school year by checking up on them regularly, providing advice on how to do better in school, and hosting freshmen only events.
Since 2013 Link Crew has built a foundation of positivity at Loy Norrix and has become so popular that the school made a class in the 2014-2015 school year for the Link Leaders to practice their leadership skills. The Link Crew class, named Link Crew Leadership, focuses on creating a positive environment at Loy Norrix. The teacher, John Kreider, decided the biggest assignment for this trimester’s class is their final project called “Dude. Be Nice.”
Founded by Brent Camalich, “Dude. Be Nice” started as an apparel company. The company provides clothing for men and women, with the words “Dude. Be Nice” printed somewhere on the apparel. However, Camalich is trying to make the company more than just a clothing label. He is striving for young adults to create a positive effect on their community by giving recognition to a group or specific person in a fun and meaningful way.
Once Kreider heard about this project at a conference for Link Crew he decided to implement it into the class as the final project.
“I decided on making this their final project because the overall goal of the class is to positively affect the school’s culture, and the ‘DUDE. Be nice’ project promotes students to honor someone in a special and positive way,” said Kreider.
Since Kreider gave the students their project, there have been four projects completed around the school. The class has recognized the guidance office staff, the cross country coaches Coach Schmidt and Savicke, and security guards Jacqueline Hampton and Annissa Pace.
“We chose the guidance staff because they usually get blamed for a lot of problems, but they work extremely hard to keep the students on track to graduating,” said junior Maeve Wilson.
The counselors were surprised by a breakfast made by the class. The Link Crew Leaders wanted to show appreciation for all the hard work they dedicate to Loy Norrix students and to their jobs.
“It just made my day that you thought about all of us,” said guidance office secretary Debra Kuntzman. “It makes us feel good that we have an impact in all of your lives.”
A few weeks later the class prepared to surprise Hampton. She was chosen specifically because she always greets the students in the tower and is extremely friendly to them.
“We chose Ms. Hampton because she’s like the mom of the school. Everyone truly loves and appreciates her, and we wanted to show her that,” said senior Grace Labadie.
Hampton got surprised by walking into the cafeteria to a crowd full of students holding posters and cheering for her. She then was led to a table where she was given gifts and had lunch with the students.
“After the surprise, I knew if I were to die today, I would be happy,” said Hampton.
The Link Crew class has now completed four out of the six projects that will be happening by the end of the trimester. All of them have been successful in showing the person/group how grateful the students are to have them. However, the question remains of who will be the last two groups/staff members to be recognized by the DUDE. Be Nice project.