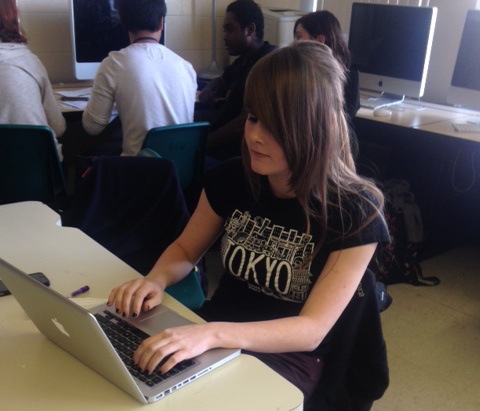 By Julia Pinkster, guest writer
It’s like a panic attack, feeling overwhelmed, senses being thrown, everything feels threatening, heart racing, I have to get out. Lauren Hybels experienced these thoughts and more at a hard time in her life when she had to miss school to stay home and be out of the classroom due to some vocal and muscular tics that randomly happened at times in her life.
When Hybels was in 5th grade, she had to go to over 20 doctors because she had a disorder called Pediatric autoimmune neuropsychiatric disorders associated with Streptococcal infections (PANDAS). Pandas is a condition characterized by vocal or muscular tics that develop after a strep infection.
Tics are habitual spastic contraction of the muscles.
“I knew that I was going to get better but I but I had no idea when or what it was going to take,” said Hybels.
Hybels was out of her regular classroom and was in the art room working on art projects starting in September of fifth grade.  The art room was where she could work even when she had a tic. The condition had subsided around April, and Lauren was back in the comfort of her classroom able to work like everyone else again.
The ticking returned again around September of freshman year, and this time Hybels had to go to a clinic to help her problem.  There is an estimate of 1 in 200 children that have this disorder. She was out of school until sometime in January of her sophomore year.
After having to be removed from the classroom twice, Hybels had severe social anxiety, and would rarely leave the comfort and coziness of her room for more than a little while.
“I was never myself, I was always quiet,” said Hybels.
She later broke out of her shell when she came back to what was supposed to be her sophomore year of high school and became more true to herself.
Going through that hard situation helped her find out who she was in her own eyes and who she wanted to be.
“It’s hard being stuck with something that no one else understands,” said Hybels.
Hybels learned to be more understanding about other people because she had gone through tough times herself.
She advises other people to have the courage to be themselves and to stop spending so much time worrying about what other people are thinking.
Hybels got through the worst times by having the support she needed from family and found the courage to do whatever she wanted to do no matter what other people thought of her.
One of her worst experiences was when she came back from her medical leave from freshman and sophomore year of high school. No one remembered her even though she had known some of the people since they were very little, she had to reintroduce herself to people she still remembered.
Hybels wants to be a makeup artist for a career, more specifically she would like to be a transgender makeup artist.
This form of art for her is a creative outlet and in the process she would like to help the transgender population find out more about themselves.
“I think you really find out who you are when you are in a really hard situation and that’s how you figure out how you can deal with things,” said Hybels.
Delete Image
Align Left
Align Center
Align Right
Align Left
Align Center
Delete Heading