The Unstoppable Warriors Storming Through The League 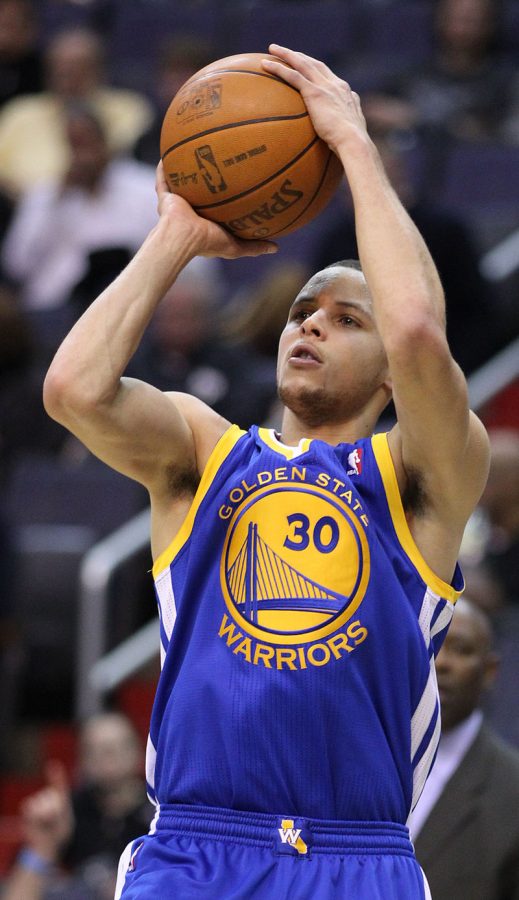 Stephan Curry leading the Warriors with what he does best shooting. Curry is currently leading the League in most three pointers. Photo Credit / Keith Allison

The Golden State Warriors, an unstoppable team started the season off with a record of 31-2 placing them at the top of the Western Conference. Leading them is the reigning Most Valuable Player of the NBA, 6’3” point guard Stephen Curry. They have destroyed every team that has stood in their way so far.
On December 12th the Milwaukee Bucks beat the undefeated warriors with the ending score of 108-95. The bucks are finally the team that beat their 23 game streak. Stephen Curry is  a man amongst boys. He averages 31.6 points per game(PPG) along with 5.2 rebounds and 6 assists a game. Curry is a three point specialist averaging 4.9 three pointers per game. He is the holder of many records, for example the most three pointers in a month, and the most three pointers in a season beating his own previous record of 276.
Last year the Warriors beat Lebron James and the Cleveland Cavaliers in the NBA Finals beating them in the race to win four games. This was the first championship for the Warriors since 1975. That is 40 very long years of no championships.
After the NBA Finals, the Bill Russell NBA Finals Most Valuable Player Award was handed out to Andre Iguodala, who averaged 16.3 PPG with 5.8 rebounds and 4 assists during the series, all while coming off the bench.
Golden State loved the way last year ended, but it just keeps getting better. Everyone is so focused on the Warriors stunning offense, but it’s their defense that is responsible for the great start to the 2015-16 season. The Warriors average 8.5 steals per game, and Curry is in second place in the league for steals. Their defense is full of intensity and communication, off their opponents mistakes they get 21.2 points, which is a huge part of their success.
The Warriors are lead in scoring by the “Splash Brothers,” the combination of Stephen Curry and Klay Thompson. They’re the top scoring duo of the Warriors, dubbed “the greatest shooting backcourt in the history of the game” by former Golden State Warrior coach Mark Jackson . The way they got their nickname is by “splashing” three point shots. Together, the both of them score over 38 points and 8 assists a night.
Thompson holds an impressive record of his own, for the most points in one quarter at 34 points. Last year against the Sacramento Kings, Thompson was 13 for 13 on the floor and 9 for 9 from three point range. In Curry’s 6 years in the NBA he has scored 9,635 points, and in Thompson’s 4 years in the league he has scored 5,964 points with a combination of 15,599 points.
“I think the thing that makes them a championship squad is that they have good court communication.” said sophomore Zack Sims,  “And that it’s not just Stephen Curry and Klay Thompson, it’s the other 13 players on the team that contribute to a skilfull performance level.”
The Warriors have had difficulties this season with their head coach Steve Kerr. He has been recovering from back surgery that happened earlier in the summer. Kerr was a former player for the Chicago Bulls and the San Antonio Spurs through the 1980’s and 2000’s. In his first year coaching for the Warriors he lead them to their first championship in 40 years. He has recently taken a break this season due to his recent back surgery during the offseason (USA TODAY). In the meantime, assistant coach Luke Walton has taken responsibilities as the interim head coach.
“I’m not a big fan of the Warriors, but they are very good and fun to watch,” said sophomore Lee Jones, who is just one of many students at Loy Norrix who have taken notice to Golden State’s recent success.
The Warriors have yet to play the other two top western conference teams, the San Antonio Spurs, and the Oklahoma City Thunders who gave them a run for their money last year. Leading the spurs is Kawhi Leonard who seems to be the next “big thing.” The thunder have Kevin Durant and Russell Westbrook who are two outstanding all-stars. They will play the Spurs on January 25, 2016 and play the Thunder on the 6th of February. These are two games to look forward to.
Cleveland Cavaliers  and Golden State Warriors, the two final teams rival off against each other again, the outcome of the game was 89-83 warriors still on top. The Cleveland Cavaliers have a bad taste in their mouth from last year and want revenge. The Cavs have started their season with a record of 22-9.
Are the Warriors lucky or are they the best team since Michael Jordan’s 1996 Chicago Bulls, who set the record for most wins in a NBA season at 72 games? Golden State is an unstoppable team at 31-2, could they possibly set the new record?
Delete Image
Align Left
Align Center
Align Right
Align Left
Align Center
Delete Heading