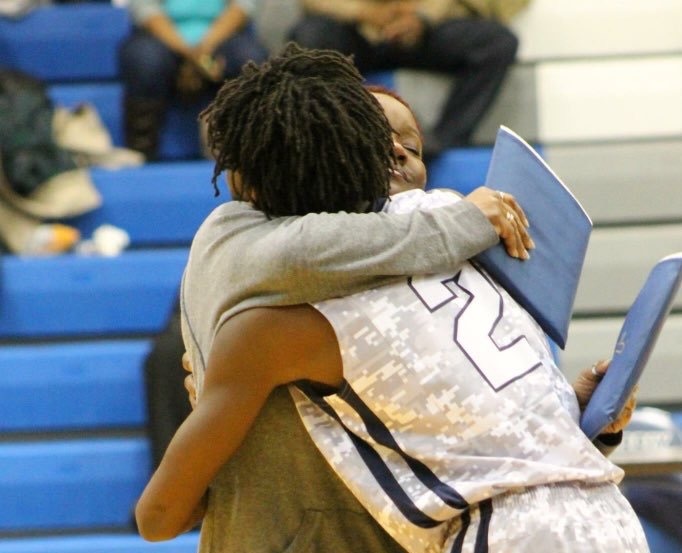 A big question often asked by coaches to their players is who do you truly play for? The common answers are their family or friends, but on January 19th, 2016, the Loy Norrix Knights varsity basketball team played for those who have kept us safe after many years, the veterans and current military of the United States.
Organized by varsity basketball coach Matt Covault, the night was set up to honor current military members and veterans. The presentation of the flag by the U.S. National Guard started off the event, followed by honoring the veterans at halftime. Then following the game a reception for the honorees.
“I am very proud to have played a small role in this event. The military does not get the respect and recognition that it deserves, so my hope is that this event will help to bring a bit more of that respect and honor to all of the amazing servicemen and servicewomen in attendance,” said Covault.
Many players of the Knights varsity basketball team honored family members who have defended our country. GK Wells-Lindsey (Mother and Father), Jake Link and Max Link (Both Grandfathers), DQ Wiggins (Dad and Uncle) and coach Matt Covault (Father). The game was dedicated to all of them and anyone else who has put their life on the line for our freedom.
“I hope that by holding this event, the student body realizes how lucky they are to have their freedom and also be able to associate the cost of their freedom by witnessing the military members at the event,” said Covault.
The stands were packed with parents, military personnel, veterans and excited fans ready to cheer on the Knights as they took on the Battle Creek Central Bearcats. The men’s varsity team sported new school colored camouflage jerseys donated by the army. Each jersey had a different word on the back to show what it takes to be a soldier: honor, courage, respect, loyalty, integrity and duty.
“It was awesome to honor veterans and give them what they deserve, and the game overall is a big step towards a conference championship,” said senior Jake Link, Link honored both of his grandparents as they both were in the Air Force.
The Knights put up a battle, going back and forth until the final buzzer when Battle Creek Central hit a three-pointer for the win. The Knights lost 57-56, but sometimes the game isn’t all about the wins and losses, it is the people you truly play for.
Delete Image
Align Left
Align Center
Align Right
Align Left
Align Center
Delete Heading