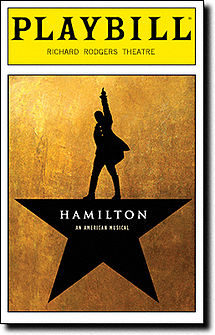 Though many only know him as the guy on the ten dollar bill, Alexander Hamilton, one of the founding fathers of the United States, found his way to Broadway in New York City on August 6, 2015. Before making it to Broadway, Hamilton made a debut performance on Off-Broadway theater in New York City, the Public Theater, in February of 2015.
Hamilton: An American Musical is a “hip-hop musical” with lyrics, script, and music by Lin-Manuel Miranda and based off the biography “Alexander Hamilton” by Ron Chernow. The musical tells the story about a young, hot-headed immigrant Alexander Hamilton, driven by ambition and  obsessed with his legacy, who made his way to the top of politics and attended the Constitutional Convention. The show tells of Hamilton’s personal scandals and tragedies, and how he eventually was killed in a duel by fellow politician, Vice President under Thomas Jefferson and friend,  Aaron Burr. This musical is very unique in “modernizing” the 1700s.
As said in a radio ad, Hamilton is “a story of America then, told by America now.”
Junior and Broadway enthusiast Lena Wood loves Hamilton and all that it stands for.
“I don’t think that the use of rap in the show is just used to appeal to younger audiences, but it also allows so much more to be said with the span of two and a half hours, more than traditional musical theater,” said  Wood.
The soundtrack of “Hamilton” is on Spotify, iTunes, and YouTube; it is worth taking the time to check out.
“Probably the most noticeable aspect of the show besides the score [the music] is the casting,” said Wood, “This show gives a fantastic opportunity to many Black, Hispanic and Asian theater actors [by casting them in the lead roles] who otherwise would not be working or would be stuck in ensemble roles for their entire careers.”
As the hottest show currently on Broadway, “Hamilton” is sold out until September 2016 and has made over 1 million dollars at the box-office.
Well then how do ordinary people get tickets if they’re all sold out? All hope is not lost.
On certain show nights, Miranda and cast members of the musicals “Hamilton”, “In the Heights” and “Bring it On” (these are the musicals he created) , gather outside of the Richards Rodgers Theater, or in the lobby depending on the weather, for a crowd of about 500 people on average to participate in a raffle. The winners get the opportunity to purchase front-row tickets for the show that night–at only 10 dollars each. These seats would normally cost between $100 and $200. This event is called HamForHam because you only have to pay a Hamilton to go see “Hamilton”.
Along with celebrities like Beyonce, Julia Roberts, and Jon Bon Jovi, President Barack Obama and his family have seen this historical musical.
According to Christian Holub from “Entertainment Weekly”, Obama praised “Hamilton” very highly.
“It’s brilliant, and so much so I’m pretty sure this is the only thing that [former vice president] Dick Cheney and I have agreed on,” said Obama, “It speaks to this vibrancy of American democracy, but also the fact that it was made by these living, breathing, flawed individuals who were brilliant.”
Even though the historical figure Alexander Hamilton is briefly covered in regular and AP U.S History, most who have seen this musical or have even listened to the music, have learned more about Hamilton than in their classes.
“We mostly just talked about how he set up the national bank,” said sophomore and AP U.S History student Bonnie Bremer, “I didn’t know how important he was until this musical.”
“He’s under appreciated,” said AP U.S and European History teacher Matt Porco, “ he [Hamilton] had such a big influence on that time period.”
Porco was then asked about what he thought about the musical in general.
“I think it’s great, but not a surprise,” said Porco, “that generation is obviously so interesting. What’s surprising is that Alexander Hamilton is the subject of it.”
For all the people that would be interested in seeing this hit musical, but don’t want to travel all the way to New York City, “Hamilton” plans on touring to the PrivateBank Theater in Chicago this September.
For a founding father who was determined to make a legacy for himself, it is safe to say that “Hamilton: An American Musical”, will keep Alexander Hamilton’s story alive for generations to come.