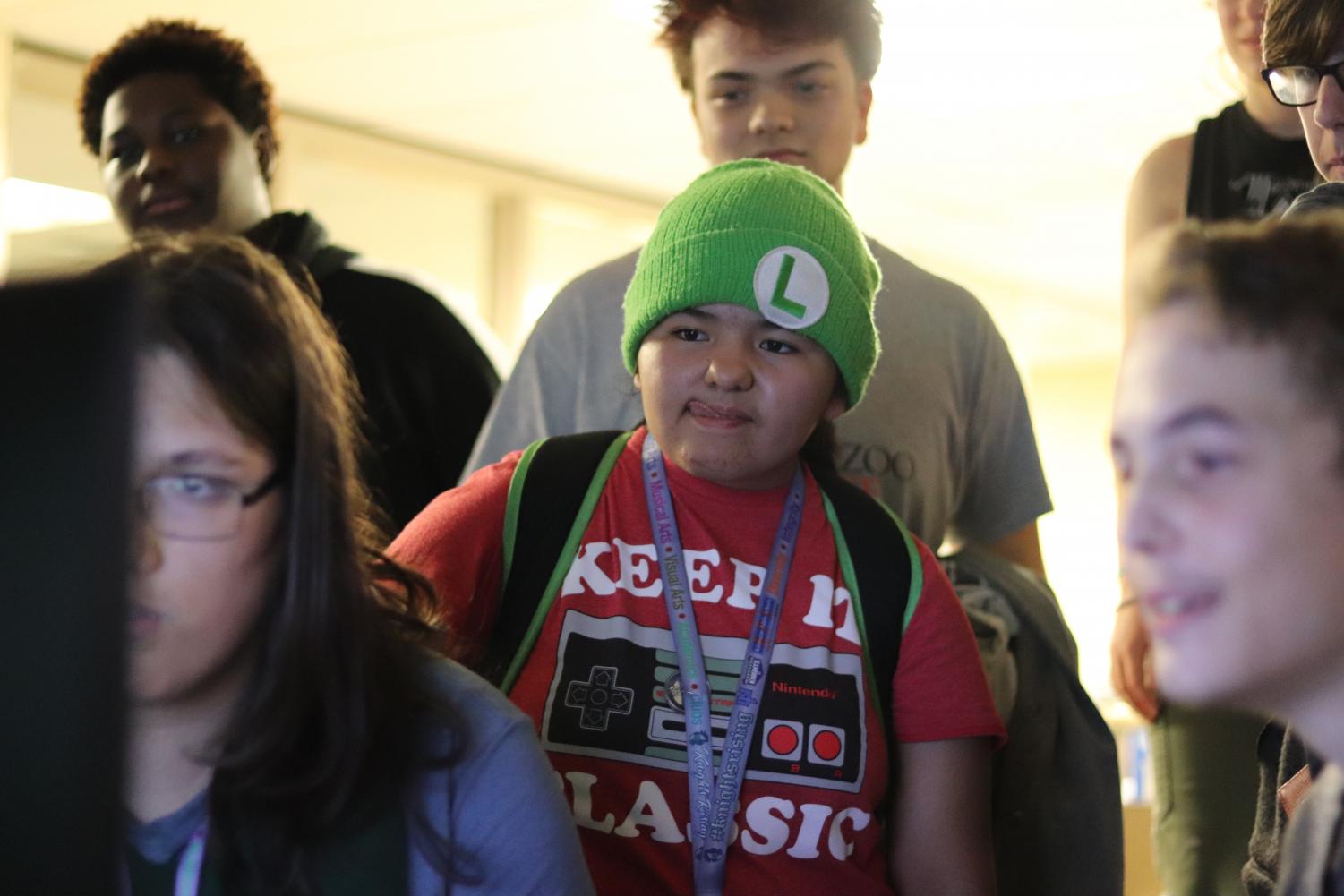 Two competitors face off for a place in the finals of the Super Smash Brothers tournament. The game is a favorite among students, which is clear from the groups playing every day in the cafeteria. (Credit: Elliot Russell)

Two competitors face off for a place in the finals of the Super Smash Brothers tournament. The game is a favorite among students, which is clear from the groups playing every day in the cafeteria.

In the library, six Nintendo Switches were set up for this best of three single-elimination tournament, meaning one loss and you’re out for good. Only one could be crowned the victor.

On September 27th, the Loy Norrix esports club hosted its first “Super Smash Brothers Ultimate” tournament. The turnout was much larger than expected, with over 50 competitors. Even six Kalamazoo Central and two Phoenix students heard of the event and took a bus over after school to compete.

After a long, hard-fought string of battles, Loy Norrix sophomore Adam Ismaili-Alaoui took a victory over the competition. The whole event was set up by the head of the esports club, math teacher Patrick Greeley.

“My hope with the Smash tournament was to have as many students as possible share their passion for games — SSBU in particular — and to create a community at Norrix that gamers could be a part of. I see the tournament this past week as an absolute success. We had 56 students show up,” Greeley said.

One year has passed since the inception of the Loy Norrix Esports club. Ever since then, a small but growing community of gamers have come together and bonded over their hobby. Last year the “Overwatch” team attended two national competitions, one in Elkhart, IN, and the other in Noblesville, IN. They placed third in both.

The “Overwatch” team and the “Smash Brothers” team also competed in the High School Esports League, a national league that had the teams competing in one game per week. Neither team made it to playoffs; however, the “Overwatch” team was only one win from being eligible.

This year, the “Overwatch” and “Smash Brothers” teams are both competing in Michigan High School Esports Federation league. According to their website, “MiHSEF is run entirely by a federation of Michigan Schools dedicated to providing the best student experience in Michigan K-12 esports. We welcome any team whether you are just starting up or are already well established.”

The “Overwatch” team is also competing in the North American Scholastic Esports Federation league, a national league that has the team playing two matches a week in addition to their one match a week in the MiHSEF league. NASEF is similar to MiHSEF in many ways except it has competition from all across the United States.

The “Smash Brothers” team headed by senior Gabe Vroman, with Ismaili-Alaoui on the starting roster, has been dominating the competition at the beginning of this season, remaining currently undefeated.

In an interview, Greeley spoke on what his motivation was to start the esports club in the first place.

“When I was in school, video games weren’t very often something you could do socially — at least not for me. I did play games with some of my friends, but most of my time was spent in my parents’ basement playing alone. It was like this hidden part of my personality that I couldn’t share with anyone because I never knew who else was into the games I was playing, and it was hard to bring that up at school,” said Greeley.

Greeley doesn’t want students of Loy Norrix to feel like he did back then, and his vision of a place where people who have a common interest in video games is starting to come to fruition with the tournament helping fill out Loy Norrix’s new “Super Smash Brothers” team with new faces as well as old. Bonds were formed on the day of the tournament. People who had never talked before met and connected over a common interest.

“I didn’t know there were that many people interested in playing ‘Smash’ at a semi-competitive level. If I was a freshman I would have thought it was pretty cool because I would know there are people I could talk to about my interests,” said “Smash Brothers” team captain senior Gabe Vroman.

Shy underclassmen got to discover friends who were like them, as well as upperclassmen who they had previously feared. The energy in the library on that day was simply infectious, a state of chaotic excitement, as well as a strong sense of community.

“I just sat down with some people practicing and started talking to them! It’s kinda surprising how easy interaction is when you share interests,” said freshman Loden Krueger.

The esports club’s story is one which is still being written, each chapter more exciting as more and more people get involved and are offered new and interesting experiences and personalities.