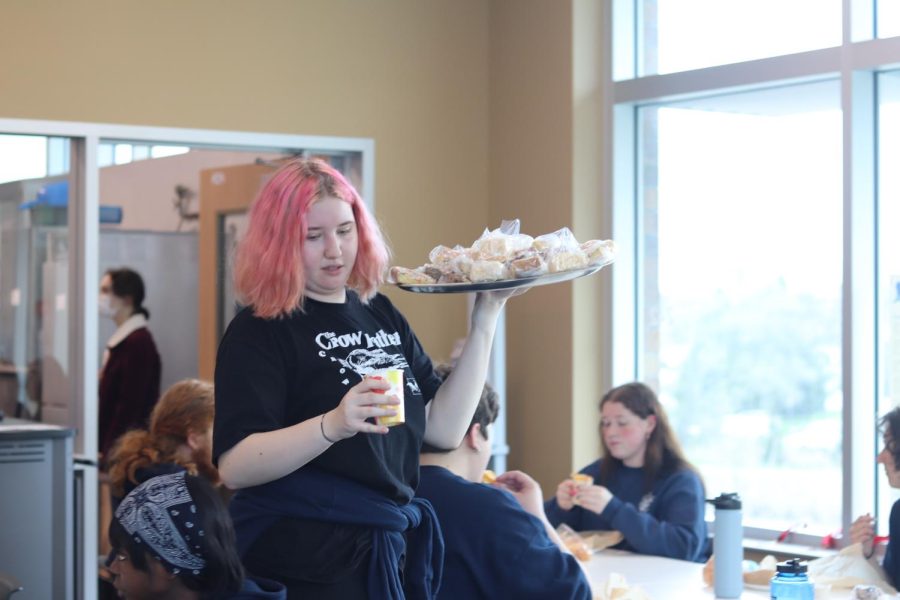 Junior Connor McBride carries out a platter full of sweet treats for Knight Life students to take seconds. Many students grabbed more dessert and the Rice Crispy treats were quickly out of stock.

Knight Life reporters were led into a classroom connected to a large industrial kitchen which they toured. The kitchen was covered from head to toe with shiny stainless steel, a beacon of light pointing to the end of the tunnel, the meal.

Once we arrived, two of the CTE instructors greeted us, Chef Hayley Ennest and Chef Kharen Warfield-Shelton. They led us up two flights of stairs, which were definitely worth what was waiting for us at the top.

At the end of our tour, there was a spread of different foods that we had ordered prior to our visit..

The food had been made for us over the prior week by Culinary Arts CTE students, some even from Loy Norrix. The options included a falafel wrap, which was gluten free and vegan, a Buffalo-chicken wrap, and a chipotle turkey wrap. For dessert, they offered a Rice Krispy treat, an Oreo blondie bar, or a cake batter blondie.

“I meant it as an offhand comment, I wasn’t expecting it to go as far as it did,” said McBride  “As soon as I mentioned it to Mrs. Pankop, I immediately sent a Remind text to my culinary teachers and they were like ‘this is cool, we can try it out’”

“Everyone had their own sort of thing that they were focused on, some people were in charge of cooking the chicken, and then the second day was just everyone on prep,” McBride continued. “It allowed me to participate in something that would be a regular part of running a catering business, planning for a group of people and following limitations based on dietary requirements.”

McBride also saw the perks of having her peers eat and enjoy the food that she and her classmates made.

“I knew that they’d be honest about whether or not the food was unpleasant,” said McBride.

Kharen Warfield-Shelton also weighed in, talking about the logistics behind their decision to cater for us during our field trip.

“We want them to do some catering at least two to three times a year because it is our only opportunity to cook for the public,” said Warfield-Shelton. “We have a beautiful kitchen, but there is no real outlet for students to prepare food for the public, which is what you do as a cook and a chef. So, whenever we have those opportunities we try to take advantage of them.”

Like McBride, Warfield-Shelton saw the benefits in the Culinary Arts students making food for their peers.

“I think that young people like to know what other young people think,” Warfield-Shelton said. “We know that food is very trendy, like fashion. We know that large groups of people are into the same kinds of foods at the same time, and so there is that aspect with younger people that have the time and a little more freedom to be about trends and to follow what’s going on and make specific efforts to be about those trends.”

Although CTE spots are full for next year, students can apply for an assortment of CTE classes, such as Culinary Arts, by talking to their counselors next year.

I got the chipotle turkey wrap which was paired with potato chips, garlic aioli and a Rice Krispy treat.

The chipotle turkey wrap included three meats, turkey, salami, and bacon, as well as muenster cheese, tomatoes, lettuce, and onions.  As I bit into it, I immediately noted the wonderful flavor of the chipotle sauce distributed throughout the wrap.

The wrap was delicious to say the least and although my spice tolerance is fairly low, I didn’t find the chipotle sauce too spicy. I almost wished it had a little more of a kick to it.

After finishing the main course of the meal, and with a long water break, I moved onto the dessert. I don’t have a lot to say about the Rice Krispy treat, anything with marshmallows tastes wonderful to me.